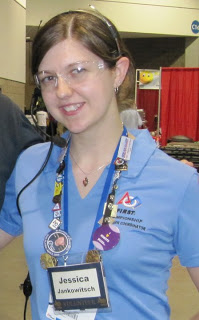 Jess Jankowitsch has been around the FIRST program since her early days as an FLL student. She has performed nearly every job you can think of in FRC. She has been an FRC team president, mentor, emcee, judge, senior mentor, championship volunteer coordinator, assistant regional director, and she even finds time to run one of the best off-season events in FIRST, Texas Robot Roundup. Jess’s contributions to FIRST are substantial and Texas FRC teams are lucky that she moved down here from Pennsylvania for graduate school. Jess is one of our 1st non-engineering mentors that we have featured on this blog. The FIRST program wouldn’t be the same without the hard work of dedicated volunteers like Jess. Continue reading to hear from Jess about why she is studying psychology, her favorite music, some great advice, and even a recipe.

What inspired you to do what you do? Tell us a story.
I suppose I do two main things… psychology and robotics.

Perhaps surprisingly, I was inspired to study psychology because of my involvement in FIRST. Back in high school, I thought I wanted to become a medical doctor, and more specifically a Pediatric Oncologist. Because of my participation in FIRST and my involvement with 103’s 2003 Championship Chairman’s Award recognition, I was fortunate enough to get to shadow Dr. Bart Kamen for a day at the Cancer Institute of New Jersey. That experience was life changing. It was actually Bart’s recommendation that I pursue Psychology as a major because as a doctor you aren’t simply treating a disease; you are treating people. While I later realized a career in medicine was not for me, that experience inspired and influenced many of my academic decisions and guided me to my current graduate studies in Developmental Psychology.

On the robotics end of the spectrum I, like many FIRSTers, grew up playing with LEGOS, k-nex, and making/creating/building things. My dad taught me to use power tools starting at a very young age. In general, I love technology and was always a nerdy kid, so robotics easily became an interest. My earliest exposure to FIRST happened to be in late elementary school during a Girl Scout lock-in at the high school. I was fascinated with 103’s practice field for “Ladder Logic” and became determined to find out more about robotics. In middle school, I had the opportunity to play with Mindstorms during the early days of FLL. In 8th grade was invited to visit the Philadelphia Regional. I was instantly sucked in by the energy and excitement and joined 103 in high school. My Chairman’s Award involvement and eventual role as team president expanded my understanding of and interest in FIRST. It became my goal to ensure that students get to have all the amazing opportunities I was so fortunate to have as a FIRST participant and a member of 103. After graduating, I didn’t really know what I wanted in terms of my FIRST journey, but I definitely knew that I wanted to stay involved.

What is your day job, and how’d you get there?

Developmental Psychology: As an undergrad at CMU, took on opportunities as a research assistant and laboratory manager at the Infant Cognition Lab. Combined with my love of learning and teaching, my research experience helped me realize that pursuing a Ph.D. and eventually becoming a professor would fulfill those two passions. Now as a grad student at UT Austin, I’m researching the origins and significance of appearance based stereotypes. We have special caps embedded with electrodes that we put on babies heads and use to investigate their neural responses to different types of faces. I enjoy working with kids of all ages and this research gives me an opportunity to work with an age group not found in FIRST. Infants are really interesting to work with because they haven’t been exposed to all the social and cultural influences children and adults have. Also, you must use creative research methods with babies; you can’t just ask them questions or tell them to push buttons. You can feel free to ask me more about my research if you are interested. Additionally, I’m teaching my first class in the fall – Introduction to Child Psychology – and am ridiculously excited.

FIRST: Though I was heavily involved with the Pittsburgh Regional for many years, when I moved to Texas for Graduate school I decided that it would be a great time to focus my attention on just mentoring a team instead of running events. I connected with the ausTIN CANs in the spring of 2010 and soon became a 2158 mentor. That summer, I traveled down to San Antonio for an FTC meeting. During introductions, my experience caught the attention of the new Regional Director, Patrick Felty, who had just been hired for a brand new Regional that was in the works. After quite a bit of prodding and persuasion, I eventually accepted positions as the Alamo Assistant Regional Director and Volunteer Coordinator, despite the fact that it went against my initial stance of wanting to commit myself to just one team. I knew the positions lined up with my values of wanting to ensure students and teams get the opportunities I was so fortunate to experience.

Becoming an Assistant Regional Director and Volunteer Coordinator for the Alamo Regional was really all about being at the right places at the right times. I trace it back to beginnings as a volunteer in 2006 (my freshman year at CMU). I was thrust into the position of Pit Administration Lead at the Pittsburgh Regional. Pete Kieselbach (a former 103 mentor and dad of one of my best friends from elementary through high school) was serving as an FTA at the Regional. He realized that no one had been assigned to that vital role and thought I would be a good fit for the job. In my junior year, Pittsburgh got a new Regional Director and the previous RD left her with only a handful of contacts, including mine. To my surprise, she asked me to be the Regional’s Volunteer Coordinator (VC) and Senior Mentor. I was also asked that year to join the Championship VC crew and have been the Lead Pit VC for several years. I’ve really valued my experiences volunteering, and now working, for FIRST.

What is your favorite story to tell about robotics?
I don’t know if I have a favorite – there are too many! After so many years in FIRST, you really end up with a huge store of great memories. Many inspirational. Some are ridiculous and silly. Track me down at a competition sometime and we can swap stories.

What’s your favorite robot that you didn’t help build?
I always remember FRC 95  – The Grasshoppers from Lebanon, NH – and their robot “Feynman” from 2002 (“Zone Zeal”). The event was my first official Regional with 103: The J&J Mid Atlantic Regional in the old Rutgers gym. The Grasshoppers’ super speedy soccer ball collector stood out to me; it reminded me of popcorn popper! While they didn’t win the event, they were recognized with the “Incredible Play” award (I love that retro award, one of the reasons we’ve revived it at TRR going on 3 years now). I couldn’t track down a video, but you can see pictures of it on The Grasshoppers’ website: http://www.frcteam95.org/wp/history/

What’s your workspace setup like? (Work/Robotics/Home)
At school and at home I generally just work from my laptop wherever I feel like it. I’m actually not a big fan of desks, so you’ll usually find me working on the couch or the kitchen table. In the lab I get to play with all sorts of cool, fancy equipment for electroencephalography (EEG) and electromyography (EMG) research.

Anderson High School has been super supportive of the TIN CANs and provided us with space to do great things for and with the Texas FIRST community. We’ve hosted our end of build season practice event (Austin Robot Roundup) for 7 years and the Texas Robot Roundup off-season summer event going on 3 years at the school. The team has access to a computer lab and a machine shop with all sorts of goodies (3D printer, CNC Mill, CNC lathe, etc.) that the team is gradually becoming proficient with. In the near future, the high school plans to build a 10,000 sq ft state-of-the-art engineering and technology building because of the team’s efforts to spread STEM education. We’ll be able to provide even more support to the FIRST community. That’s pretty exciting, but it’s still a few years out.

What do you listen to while you work?
I generally listen to indie-ish music, but I also have broad, eclectic tastes (latin funk, electro-swing, old school rock, classical, etc). Some favorites are Guster, GIVERS, Two Door Cinema Club, Grupo Fantasma, Caravan Palace, the Beatles, Supertramp, Chopin… like I said, pretty eclectic.

What everyday thing are you better at than anyone else?
Probably being energetic? Woodie Flowers once proclaimed that I was the “energizer bunny of FIRST.” I really do have excessive energy (and I require no caffeine).

What’s the best advice you’ve ever received?
Don’t waste time doing things that aren’t meaningful to you. Spend as much time and effort as you can on the things in life that you value and that make you happy. Spend your time on the right things. That advice is from my mom. I’ve received a lot of great advice from mentors and friends over the years, but as I’ve gotten older my mom seems to always know what to say to help me through challenges.

What is your favorite guilty pleasure?
Pizza dip. It is soooo good. Once I start eating it I can’t stop. And it’s so simple to make too. In a microwaveable dish, do a layer of cream cheese, a layer of tomato sauce (oddly enough, just use Preggo Traditional. Fancy sauces ruin it), and a layer of shredded Italian cheeses. Microwave until melty. I like to dip tortilla chips in it. You can add toppings, but it is really awesome just plain and simple. Enjoy! 😉 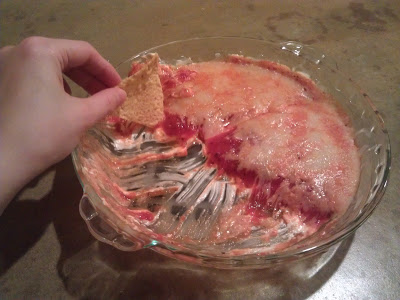