The Chairman’s Award is FIRST’s highest honor. It’s given to a single team each year at Championship and that team is inducted into the FIRST Hall of Fame. The award celebrates a team that exemplifies FIRST’s ideals and is a role model for other teams. This year FRC#1538, The Holy Cows, was the 21st team to receive this honor. Over the years, The Holy Cows have had a huge impact in southern California and beyond. You can read their Chairman’s Award entry here. In our latest edition of “How I Work” we bring you the lead mentor of this Hall of Fame team, Jon Jack. Jon has been one of the key people in building The Holy Cows into the world class team they are today. In this interview he talks about the middle school teachers that ignited his passion in technology, The Holy Cows’ facilities, and his favorite FRC robots of all time.


Name: Jon Jack
CD Username: Jon Jack
Current Gig/Job: Lead Mentor for Team 1538 – The Holy Cows / Mechanical Designer @ SeaBotix
Current Team(s): Team 1538 (2005-Present)
Former Team(s): None
Location: San Diego, CA
What inspired you to do what you do? Tell us a story.
A lot of events have inspired me over the years.

One of the biggest things happened in middle school. We had two teachers at my middle school that ran the yearbook and did classes on technology and electronic journalism. In the 7th grade I took their technology class which was pretty basic (how to type, how to use MS Word, how to design a basic website). They noticed that I picked this stuff up pretty quick and they recruited me to join their yearbook class the next year, so I did. The yearbook class was not only responsible for producing the yearbook, but also producing an electronic version called a ‘yeardisk’. Myself and two classmates did all of the scripting and graphics for the ‘yeardisk’. Over the course of the year we ended up doing a lot of work, but had an absolute blast doing it. Looking back I think that class is what really inspired me to pursue a career in technology.

I steal a lot of my mentoring style from those two teachers. Until that point in my life I had never really connected with my teachers the way I connected with them. They weren’t the stereotypical teacher that just stands at the front of the class and teaches stuff from a book. They were funny and energetic and enthusiastic about what they were doing. They went out of their way to connect with us personally. They pushed us outside of our comfort zones and challenged us to try new things. I try to do a lot of the same things with the kids on my team.

What is your favorite story to tell about robotics?
I have many, but I think I’ll share this one since it’s one I’ve told a few times.

One day in the fall of 2009, we were discussing who should be our operator at the Fall Classic that upcoming weekend. No one really stood out as a strong candidate. I remember seeing this freshman that hadn’t said much during his 3 weeks on the team. I figured why not roll the dice, it’s an off-season competition so there’s not a ton to lose. Since it was already mid-week when we made the call I didn’t have much time to train him how to operate. I think his training consisted of me giving him a 10 minute explanation of the game and our typical strategies and a 5 minute lesson on how to operate. We ended up winning the event (#2 alliance captain, undefeated in elims) and our freshman operator did a fantastic job.

That freshman was Jeremy Howe and after the Fall Classic that year, he quickly became one of the best students the team has ever had. He would go on to be our operator for the next three seasons. He was always one of the most professional students on the team and treated all the teams he came across with equal respect. Even though he lived in Alpine, CA (about 40 minutes from our high school/practice field) he was always at weekend events and always at practice. He eventually became someone that all the students on the team looked up to with many of them saying things  like “hero” and “role model” to describe him. When he lost his spot as operator this past season he ended up becoming one of our Chairman’s Award presenters and presented at the Championship this past year. After winning the Chairman’s Award this year at the Championship, Jeremy was named as one of our team’s two Allaire Medalists.

What’s your favorite robot that you didn’t help build?
I think my favorite robot would have to be 1114’s 2008 robot only because they were so dominate at running a conventional strategy that they could single-handedly win most of their matches. It’s very hard to be that dominant in modern day FIRST.

Some of the other robots that have inspired me are (in not paticular order):
Team 254 – 2006-Present: Great looking robots with a ton of attention to detail.
Team 469 – 2010: An out of the box strategy that only a few teams attempted, but they did it the best.
Team 1717 –  2008: This was the robot that made me realize that active manipulation of a game piece is important.
Team 330 – 2005: The best example of the KISS approach.

What’s your workspace setup like? (Work/Robotics/Home)
Robotics: My workspace is constantly changing depending on what phase of the season we’re
in. 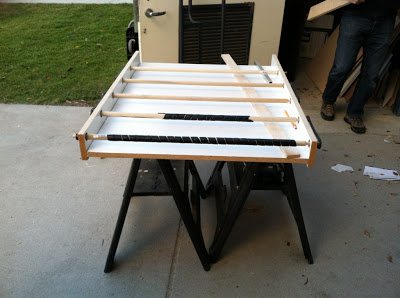 Prototyping:
We work out of a very small classroom at the Gary and Jeri-Ann Jacobs High Tech High. The classroom has a garage door so we end up opening up the garage door and doing most of our prototyping behind the classroom. The picture above is an early version of our conveyor system. 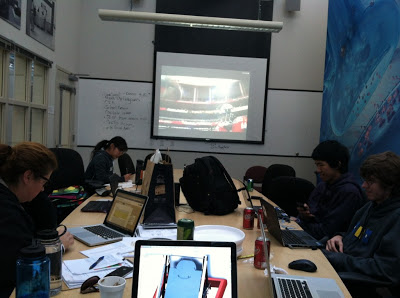 Design:
I use a MacBook Pro and use BootCamp to dual boot MacOS X and Windows. During build season I pretty much live in Windows on my laptop. We take over one of the high school’s conference rooms after school and on the weekends and design the robot. The conference room has a projector in it so we can hook a computer up to it and have design reviews with the team. During the NFL playoffs we usually have the games on during the afternoon/evening. In the picture above you can see Daisy Thunder on my computer screen. That model is pretty close to finished, with the exception of the pocketing we do on our waterjet parts. 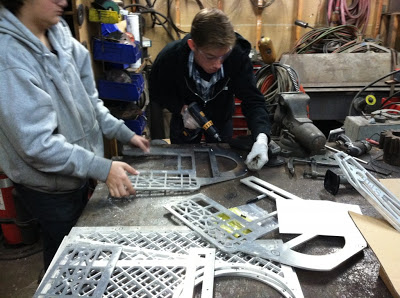 Fabrication:
During the fabrication phase of build season the team splits in two groups. Part of the team continues meeting back at the high school while 5 or 6 students and myself work at a shop down the street from the high school. At this point I’m sort of a designer/shop foreman/QA person. I let our sponsor know how much material we need and I queue up jobs for the kids running the different machines. For example, if the kid on the lathe is almost done with spacers, I need to make sure the kid on the chop saw is almost done cutting shaft blanks out of hex stock. The shop is small and from time to time I need to update drawings so I usually find some open bench space and work from there. When it comes time to weld parts together, I work with our welder to make sure parts are put together correctly. The picture above I took while a couple of students were cleaning up our waterjet parts. 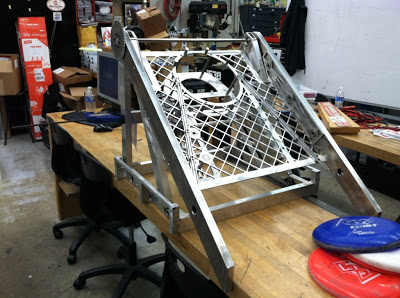 Assembly:
Once thing start dying down at the shop, we move back to High Tech High and start putting parts together. The picture above is of our practice robot early in the assembly phase around late week 3/early week 4. 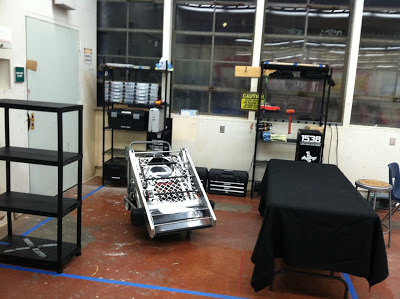 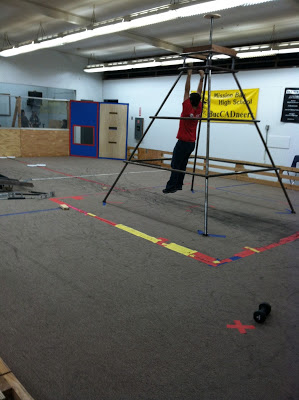 Testing / Practice:
In the fall of 2012 we worked with another local team to renovate an unused woodshop at their high school into a practice space. The last few days of build season we moved everything over to our practice field and started working out of there. After stop build we met 6 days a week. During the week we set up a carpool to shuttle kids to the practice field. The shop is about halfway renovated. We have a small closet we use to keep tools and supplies and store stuff we need when we go to competitions. There’s also a smaller classroom/office that our Chairman’s Award presenters used to practice.
What do you listen to while you work?
I listen to a lot of different types of music. I’m a huge fan of Spotify since I can listen to just about whatever I want whenever I want. When we’re designing the robot, I’m almost always listening to music. This year I think I was mostly listening to stuff like Santigold, The Aikiu, N.W.A, Yeah Yeah Yeahs, Metric, Joy Division, Buzzcocks, Jay Z, Metallica, Hargo, Public Enemy, The Soft Pack, Wavves and Best Coast. One tradition we have on the team is to listen to 80’s hip hop while we’re working late at night.

What’s your schedule like during build season?
4 months of craziness. During build season we meet from 4pm to 9pm or later and on the weekends we meet from 10am to 9pm or later. Needless to say between work, school, and robotics I’m rarely at home. It gets so bad that when I get home at night I’ve caught myself trying to unlock the front door of my house with my keys to the high school or practice field.

We usually take the day after stop build off and then start our practice schedule that Thursday. We practice Monday-Saturday at a facility away from the high school so during the weekdays a bunch of us mentors carpool students over to the robotics center. Practice usually starts around 4:30pm and then officially ends around 7:30pm, but usually we’re staying later trying to improve the robot.

We try to break up the monotony of build/competition season by playing games. During build season we have Saturday football games where we’ll take a break in the afternoon and play football for an hour or so. This year during competition season we would play basketball while waiting for the robot’s motors to cool down. In addition to being a way to relieve stress during build season, it’s great for team building.

What everyday thing are you better at than anyone else?
Remembering random facts.

“Learn from the past, don’t live in it.”
This can be applied to both life and competitive robotics. In life you don’t live in the past, otherwise your failures will consume you and your accomplishments will make you complacent. This was also an important lesson I learned as a drive coach from 2008-2012. Early on when I lost a match, I wouldn’t let it go and then it affected my performance in the next match and the match after and so on. After a while I learned to spend a couple of minutes on what went wrong, figure out how to make sure it doesn’t happen again and move on to the next match with a clear head.

What is your favorite guilty pleasure?
I live in San Diego, which is a city with many great taco shops (many of which are open until 2am or later). I’ve lived here all my life and I’m still finding new (killer) taco shops. However, during build season nothing beats running through a Taco Bell drive-thru on my way home late at night.

“It’s the little details that are vital. The little things make the big things happen.” – John Wooden
Tags: How I Work

Scott Rippetoe – This Is How I Work