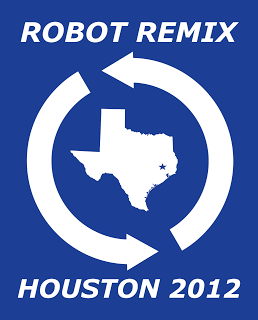 Spectrum had its last event of the 2012 FRC season on Saturday (10/27). The inaugural Houston Robot Remix took place at College Park HS in the Woodlands. Thanks to Texas Torque (FRC#1477) and all the volunteers that made the event possible.

Spectrum had a great time competing with UltraViolet one more time this year. There were only 20 teams at the event so every team got on the field at least 8 times during qualifications. Our drivers weren’t rusty at all and came out of the gate firing on all cylinders. In our first five matches we went 4 – 1 and were looking good to be a top seed at the event. The last three matches of the day proved to be a bit tougher and we lost all three of them partly because we had our main breaker malfunction. After a quick replacement we were ready to go for the elimination matches.

We were selected by the third seed in the tournament, the home team, Texas Torque (FRC#1477). We rounded out our alliance by selecting the Shadetree Mechanics from Killeen, Texas (FRC#3999). In our first elimination match we put in place a strategy that involved Shadetree defending and feeding ball back over to our side of the field. Torque was designated our main scorer and we collected balls and fed them to them while they were in place to score. This strategy worked perfectly and we won that match 78 – 1. The next two matches went downhill when our Driver Station laptop stopped recognizing our driver’s inputs. We found the problem was a malfunction with the USB hub driver but by that time it was too late and we were down a match to the number 1 seeded alliance in the semi-finals. We put up an awesome fight in the last match but when Shadetree got stuck on the bridge there was too little time for us to work in a new balance and we lost 60 to 65. Overall it was an excellent tournament that introduced a lot of people to FRC and gave a lot of students more experience.

You can watch the webcast archive of the event here.

Thank you to Houston FIRST for sponsoring such a great an event and making it free for local teams. We can’t wait to come back next year.