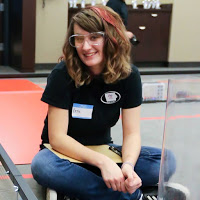 In this week’s How I Work, we’re delving into the life of a
Katie Widen a former student
of 1675 who is also the Co-founder and former mentor of 3928. Katie is currently
working as a Software Engineer at VEX Robotics while mentoring 1296 and
training to be an FTA. Katie tells interesting stories about her time on her
team and the different things she has learned through her many years in
robotics. Read more to know more about Katie and her experiences to become the
amazing mentor she is now!
[Responses from September 28, 2016]
Name: Katie Widen

CD Username: Katie_UPS
Current Gig/Job: Software Engineer at VEX Robotics
Alma Mater/Degree: Iowa State University – BS in Computer Engineering
Current Team(s): 1296 – Full Metal Jackets
Former Team(s): 1675 – The Ultimate Protection Squad (student), 3928 –
Team Neutrino (mentor and co-founder)
Location: Greenville, TX
Hobbies: Rock climbing, sewing, ukulele, painting, and playing
with my dog
What inspired you to do what you do?
Tell us a story.
Unlike many kids who join FRC, I had no intentions of
becoming an engineer: I was going to be a journalist or a psychologist. I
joined 1675 (UPS) because my siblings did it and I wanted to animate/write but
quickly was whisked into welding and building. When I was 15 I went to Boston
with my mom and visited the MIT Museum of Science. I got to interact with these
very delicate and precise kinetic sculptures that combined engineering and art.
There and then, I decided I wanted to be an engineer. Because of all my work
building and designing with 1675, I figured I would be a mechanical engineer.
It wasn’t until college when I took a programming class on a whim that I determined
I wanted to be a computer engineer. 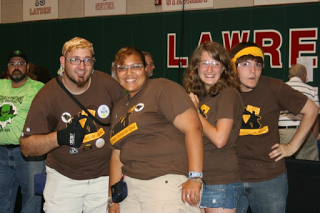 By
my sophomore year of college, I got hired as a Teaching Assistant and ran
hands-on programming labs where students applied what they learned in lecture
to write functioning code. I had to answer questions, reteach concepts, and
started running review sessions for additional help. I loved that job so much I
almost switched to teaching, but instead decided I wanted my engineering work
to apply to education (a large part of how I ended up at VEX).
What is your day job, and how’d you get
there?
I write firmware for VEX Robotics,
which is to say I write code that enables student’s programs to turn motors and
read sensors.
I
had a friend working here who encouraged me to apply for an internship. I
received an offer but declined it because I wanted to try working at one of the
big programming companies. While that was an interesting experience, I wasn’t
really interested of the type of work I was doing and the company’s values
didn’t resonate with me.
I
applied again to VEX because I wanted to work somewhere that was making
products with social impact and for the educational sphere. I interned the
summer before my last semester at Iowa State and created an automated tool for
testing firmware updates. During my time there, I got an offer for a full time
position that I later accepted. I’ve been a full time employee since February
of 2016.
What is your favorite story to tell
about robotics?
When Neutrinos (3928) was a rookie
team:
First:
Our team name was almost “i.” Not “Team i” or even a capitol “I,” just
lowercase “i.” The next day we came back to the shop and all agreed that we
should pick a different name.

Second: This was 2012 when part of the game involved balancing on a bridge with
other robots and we were looking for the easiest way to balance with other
teams. The Q&A said the plastic ball deflectors under the bridge counted as
bridge, so we set out to build a 7 in’ tall robot that could fit between the
ramp and plastic and also shoot high goals. This was incredibly difficult, but
we went at it anyways. 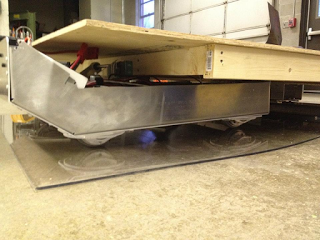 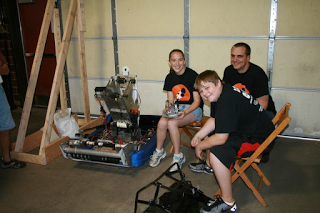 During
Week 5, the Q&A deemed our strategy illegal. The shooting part of the robot
didn’t work that well anyways so we decided to do a major rebuild. Our students
bagged a belly pan, bumpers, and some wheels and then completed Build Season
Round II: Withholding Allowance Edition, where we completely rebuilt our ball
grabbing and shooting mechanisms to be under 30 pounds before our regional
(where we seeded 5th).
What’s your favorite robot that you
didn’t help build?
Simbotics (1114) 2008: This is
probably one of the most popular answers to this question, but that robot was
seriously incredible. I was a rookie that year and we played against Simbotics
at our first regional. My team bit off more than we could chew and ended up
with a drive base and a non-functioning telescoping elevator. In contrast,
there was Simbot SS: a beautiful machine that played the game with ease at our
week 1 regional. I was in awe of this dominating robot and saw the potential of
what could be built. My team’s alliance somehow beat them in a qualification
match but they went on to win the event and worlds that year.

I also have to give some love to
Winnovation’s (1625) robots from 2008-2011. They liked to do a lot of crazy
things (6-wheel swerve drive, anyone?) without a lot of technical mentors or
excessive resources. My high school team was always fond of them: we loved that
you could see holes in the wrong places (evidence of lots of student
involvement) and how they proved you could succeed with the right attitude and
hard work.
What apps/software/tools can’t you live
without? (Work/Robotics/Home)
My short-term memory is pretty
terrible, so I live off of to-do lists for work and home, and I really like
Trello for this. I use the app, the web version… I even have some email filters
set up so I can email myself items to add to cards. In a similar vein I use a
lot of sticky notes, both virtual on my desktop and physical on my desk.
I
also use google calendar pretty heavily to keep track of my time and prevent
over scheduling. I used to block out what I was doing every hour in
college/high school to get my homework and projects done on time, but now it’s
just to make sure robotics doesn’t overlap with vet appointments and to
remember when Battlebots is on.
What’s your workspace setup like?
(Work/Robotics/Home)
My work desk is very messy, as a side
effect of the type of work I do. Because my job involves programming various
microprocessors, I currently have 6 different boards on my desk and associated
wires to power/program/debug.  I use
three monitors, typically one with code, one with my communication (email,
slack), and another one with whatever reference material I need. On top of all
that, I have a power supply, oscilloscope, headphones, and a cup of tea.

For home, I like to sit on my couch with my feet up. I don’t do much productive
work at home, unless it’s sewing – where I use a basic Singer sewing machine on
whatever surface I can find (typically my kitchen table).

For
robotics, 1296 has a really neat build space inside an industrial building. The
whole shop used to be just for us (and the owners who worked out of some
offices) but it very recently has been turned into a Makerspace, which will be
an interesting dynamic for the team. The best part of the makerspace -for me-
is that it partially enabled/encouraged our team to acquire an in-house welding
set up. 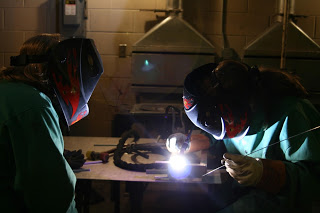 You’ll
most often find me in the welding booth during build season. Other welders know
that safety and prep are the most important parts of welding, so most of the set-up
revolves around that. I keep lots of wire brushes (clean surfaces make better
welds) and a grinding wheel for electrodes (they need to be sharpened like
pencils), and everyone in the booth with me is wearing protective gear
(jackets, gloves) and welding masks so no one goes blind. I run a tight ship
when welding is involved because the risk for injury is so high, and I train
team welders to do the same. I can never remember which welders I’ve used: as
long as it’s TIG and functioning, I don’t really care.
What do you listen to while you work?
Lately I’ve been really into the
soundtrack from Guardians of the Galaxy, but typically I like to listen to a
lot of electronic music, namely house, to get my energy up and keep my focused.
If I’m in a more mellow mood I listen to a lot of instrumental/orchestral
music. However, I’ve been known to listen to one song on repeat for hours if I
really need to zone in which can be anything from pop (“Chandelier” by Sia) to
house (“Hey Hey Hey” by Thomas Jack) to acapella (anything by Pentatonix), or
even video game music (“Rainbow Road” from Mario Kart 64).
What everyday thing are you better at
than anyone else?
I’m pretty good at noticing when
someone gets a haircut. Not amazing, but pretty good.
What’s the best advice you’ve ever
received?
“Always ask
questions.” The first time I vividly remember receiving this advice was at a
performance review in an internship, where despite asking lots of questions,
they thought I wasn’t asking enough. Since then, I realized asking questions
has led me to a lot of opportunities and knowledge that I would’ve had
otherwise (and helps with grades, you learn more when you ask questions). 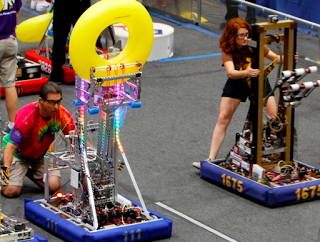 I think it’s important to ask how and why
about everything… and not just in an academic sense. I think people worry
that asking questions/asking for help makes them look dumb, but it doesn’t –
and struggling for no reason other than not wanting to look dumb is way worse.
Additionally, I’ve noticed most people genuinely tend to enjoy answering
questions and sharing their knowledge. This ties nicely with one of my favorite
mottos: “If you’re the smartest person in the room then you’re in the wrong
room.”
What is your favorite guilty pleasure?
I
love watching teen dramas on Netflix. I’m in the middle of Switched at Birth
and just started Secret Life of the American Teenager. I hear Pretty Little
Liars is good, so I might add that to the list.
Fill in the blank. I’d love to see Renee
Becker – The Executive Director of IndianaFIRST answer these same
questions. 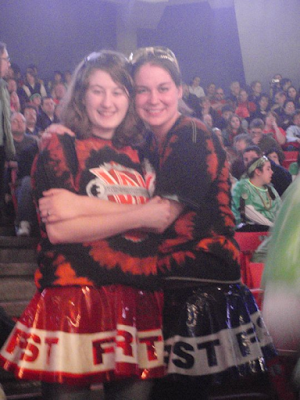 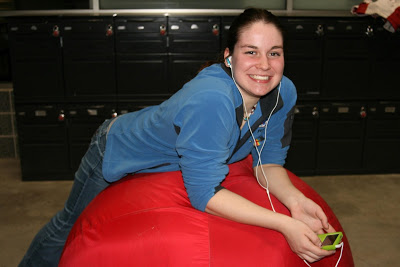 Anything else you want people to know about you?
I’m
training to be an FTA – a process that has led me to a lot of different places
and meeting a lot of different people. Big thanks so some folks in Indiana who
helped start my journey and to Iowa FTC for giving me a place to grow and
learn. The volunteer group in Texas has also been pretty awesome in welcoming
me and providing opportunities, and my employer has been very supportive of
this endeavor.

Andrew Lynch – This Is How I Work