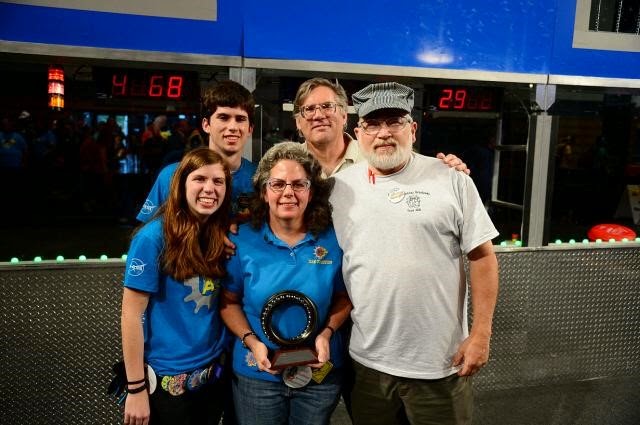 This
week we are looking into the life of Wendy Holladay, a very supportive member
of her team, always helping and encouraging her students to get the energy to
move forward. She is a dedicated founder to her team and doesn’t let anything
get in her way.
[Responses
from Jun 4, 2014]
Name: Wendy
Holladay
CD
Username: Wendy Holladay
Current
Gig/Job: Electrical Engineer
Alma
Mater/Degree: BS Chemistry (1980), BSEE
in Electrical Engineering (1981) both from the University of Miami
Current
Team(s): FRC 1912 Combustion
Former
Team(s): Various Jr. FLL teams
Location:
Slidell, Louisiana
Hobbies:
Cooking, Baking, Jigsaw Puzzles, Traveling to
National Parks

(2013 Bayou Regional: Wendy Holladay pictured
with daughter Rachel, son Sam, husband Ken and long-time robotics friend,
Curtis Craig, who is also a Woodie Flowers Award Winner at the Bayou Regional
and who presented the award. Missing are the two older Holladay children, Ben
and Annie.)
What
inspired you to do what you do? Tell us a story.
I had a BS in chemistry and I was marrying a
math professor. I realized that having a PhD in chemistry would make is
difficult to find a job in the same place as my husband. Chemistry requires a
PhD. I was always better in engineering so in 1.5 years, I got my BS in
electrical engineering degree.
What is
your day job, and how’d you get there?
Thirty-two years ago I answered an ad in the
newspaper. I’m the Electrical lead on a rocket engine test stand at NASA’s
Stennis Space Center. We test developmental rockets, not production ones and
many times we are surprised at the results.
What is
your favorite story to tell about robotics?

Going into the 2010 season, our team’s robot had
been dead last two years in a row. I knew we couldn’t continue like this. I had
a vision of remaking our team so that instead of being centered only around the
robot, that we would center our FIRST’s vision and outreach. At that time, none
of the other mentors on our team saw the importance of the Chairman’s Award and
what it stood for. I actually got a lot of pushback. Winning the Chairman’s
Award our first year (2010) was absolutely incredible but it was even better to
watch the students as they won over and over again (2010-2013). It was after
our first win that the entire team became incredible energized. There was a
core group of students whose enthusiasm and dedication was not only contagious
but inspiring. They all saw the importance of our outreach mission and went
crazy with it. For me, it was awesome not only to watch the team transform but
also to help the students as I saw them transform and grow.
What’s
your favorite robot that you didn’t help build?
I really like the clever ideas that make you
say, “Who came up with that?”
●
148 in 2008. I
remember watching it go round and round at the Bayou Regional. Such a simple
strategy that was so effective. Nicknamed “what was that little octagon that
went round and round and round”
●
469 in 2010.
This idea was incredibly out of the box. It was fun to see it on Einstein.
Nicknamed “those people who outsmarted everyone and just fed the balls through
like boom-boom-boom”
●
33’s stinger in
2012. I’m pretty sure they were the first to introduce the stinger. Our
drivers, when balancing, would always rock back and forth and it was so nerve
wracking to watch. Then this team comes with a simple, elegant solution.
What
apps/software/tools can’t you live without? (Work/Robotics/Home)
The internet. I’m also especially attached to my
Android phone and in terms of software I’m a fan of Google Apps, especially
Gmail. With 4 children in
college, it is the communication method for our family.
What’s
your workspace setup like? (Work/Robotics/Home)
●
Work: I use my
NASA laptop with a docking station. In my office I have a couch, which I’ve had
for most of my career. Also, as a gift from my daughters, near my computer sits
a small WALL-E doll, which always reminds me that robotics should be fun.
●   Home: Well lit,
large two story living room, adjacent to my engineer designed kitchen, with
granite counter tops and my black Kitchen-Aid mixer (best counter top alliance
ever). No single use item. Upstairs a large bonus room, where many, many robot
functions have occurred, Beta testing, training, team meeting, and robot
builds.
●
Robotics: We
moved a new build space this year at the high school, the company whose
facility we used closed. We are still adjusting to as it is arguably not as
good as our old one. I truly loved our old space and dislike our new one. .
What do
you listen to while you work?
I do not usually listen to music while I work.
What’s
your schedule like during build season?
I go to work. Then I go home to make dinner. I
cook every night. Then I go to build. A good meal is always worth making.
What
everyday thing are you better at than anyone else?
Superb chef and baker.  On numerous occasions I’ve cooked and baked
for the team.
What’s
the best advice you’ve ever received?

I actually more remember the advice I didn’t
take. Over the years I was often told I couldn’t do something. That I couldn’t
have four kids, that I couldn’t be an engineer, that I couldn’t go part time,
that I couldn’t start a robotics team. Over and over again, I was told I
couldn’t do xyz and sometimes it was because women can’t do it. As I said, I
didn’t take that advice and did it all anyway.
What is
your favorite guilty pleasure?
I am at an age where I no longer feel guilty
about these types of things
Fill in
the blank. I’d love to see ________ answer these same questions.
Fredi Lajvardi from FRC 842 Falcon Robotics
(2013 Woodie Flowers Award Winner)
Anything
else you want people to know about you?
-All 4 of my children were on our robotics team.
My 2 eldest founded the team, my 2 youngest transformed the team. I now have 4
children in college, 2 in grad school, physics and robotics, 2 undergrad, 1
twin double majoring in computer science and robotics, other twin majoring in
electrical engineering. 2 in California, 2 in Pennsylvania.
-The post was scribed by my daughter Rachel
Holladay 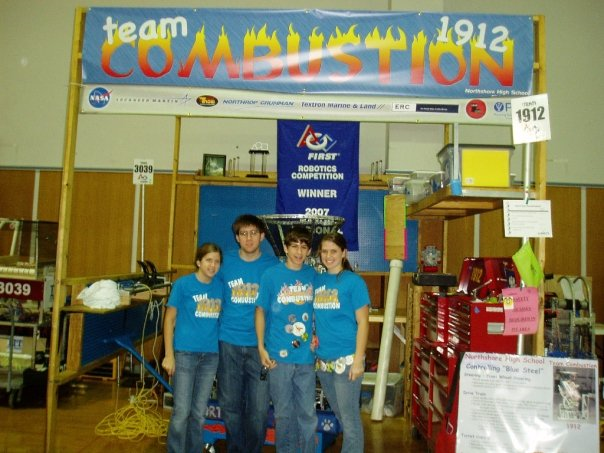 “CREAM – Cash Rules Everything Around Me” – Wu Tang Clan
Tags: How I Work

Karthik Kanagasabapathy – This Is How I Work

Day 4: Subsystems are being decided