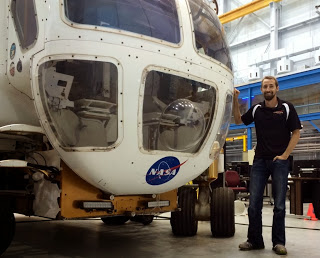 Justin Ridley is our second mentor from FRC#118 The Robonauts. He is another FIRST success story, having started on a FIRST team in high school, mentored a team in college, started his career as an engineer, and continues to mentor a team now. Justin is the key man behind 118’s recent run of exceptional reveal videos. You can hear about his job at NASA, how a skiing accident brought him into robotics, and more.

CD Username: Justin Ridley
Current Gig/Job: Robotics Engineer at NASA/JSC
Alma Mater/Degree: Michigan Technological University / B.S in
Biomedical
Current Team(s): 118 (2005-Present)
Former Team(s): 27 (1998-99), 221/857 (2000- 2004)
Location: Houston, TX
Hobbies: Traveling, Playing Hockey, Reading
What inspired you to do what you do? Tell us a story.
My sophomore year of high school, my math teacher (Woodie Flowers award winner, Kyle Hughes) asked me
to join our school’s new robotics team. I declined because I wanted to spend the winter on our school’s ski team
instead. It turns out I must not have been a very good skier because I ended up breaking
my leg during a race. With skiing out of the picture, I decided I might as well
join the robotics team.
There are a lot of
stories about FIRST changing people’s lives, and I feel like mine is probably
pretty cliché. But cliché or not, it’s just true. I didn’t have any real
interest in engineering prior to FIRST. With my gimp leg, I found myself in an
environment that slowly changed the way I thought about things. I had fantastic
mentors on Team 27 and due to them, and the program, I learned that engineering
was definitely something I wanted to pursue. This led me to go up to my mentor’s
alma mater, Michigan Tech, and study engineering. Three other alumni and I started a FIRST team up there and it has continued affecting my life since.
Being at Michigan Tech I
had the opportunity to apply for a co-op at NASA down at the Johnson Space
Center. This allowed me to get my foot in the door for a full time job here,
which I love. I can honestly say that I wouldn’t be where I am today if it were
not for FIRST. I can probably say the same for that broken leg, but I like to
give most of the credit to FIRST.
My story has inspired me
to continue mentoring students in the hopes I can help them make similar
stories of their own.
What is your day job, and how’d you get there?
I started answering
that question above. After coming to NASA full time, I started my career at
NASA as a Flight Controller for the International Space Station (ISS). For
about 7 years I worked with the group operating all of the life support systems
on ISS from Mission Control. During this time I volunteered as a mentor on The
Robonauts (118). After years of working with the other mentors on the team,
they convinced me to transfer to where they do their day jobs, the robotics
group here at JSC. Our job is basically to build really cool robots. It’s like
FIRST with a bigger budget, and I love it.

ISS Mission Control Room
What is your favorite story to tell about robotics?
Like most of our peers, there
are too many stories to pick one favorite. A lot of my favorites involve the
intense moments between matches of a tournament, making repairs, talking
strategy, etc. Back in ’08 our robot, Ballacuda, had a crab drive we had built
for a few years. Something within it broke during the Lone Star tournament and
in the process of fixing it after a match, we induced some strange electrical
problems. One thing led to another and mechanism after mechanism seemed to have
some issue. I specifically remember somebody yelling, “Just tell me what we have
on the robot that works!”, which space nerds will recognize is quite similar to
a Gene Kranz quote from Apollo 13. Even with all the stress and excitement, I
couldn’t help laughing at the time. We struggled through each match, trying to
get things back to 100%. At one point we sent the robot out with only three of
the four wheel modules… bobbling around the track. There have been many intense
moments between matches since then, and once in a while I like to jokingly yell
out that quote while there are a dozen hands in the robot frantically trying to
fix something.
What’s your favorite robot that you didn’t help build?
Chief Delphi’s (47) 2000
robot. Back then we didn’t have all the motor options we can utilize now.
Building complex mechanisms was a much more difficult task and robots were
often a lot simpler. Simple, however, was not part of 47’s vocabulary in those
days. The arm/manipulator on this thing had like five different motions to it.
It would snake down to fly under the bar and then extend back up to dump balls,
all with a swerve drive underneath. One of my favorite FIRST memories would be
watching one of the first elimination rounds of their first tournament. After
dumping a load of balls they swerved over to the opponent’s goal and started
sucking their balls out. Almost nobody in the stands had ever seen them do
this, or even know it was possible (they hadn’t used that feature until the
finals). Needless to say the crowd went absolutely nuts. This robot always
serves as inspiration to me… keeping it simple is great and all, but sometimes
it’s fun to shoot for the moon and really do something crazy. 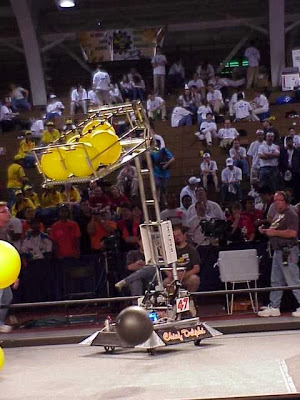 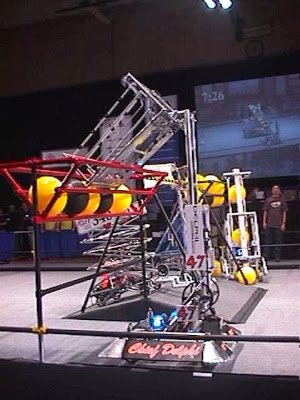 I use this all the time:
http://www.engineeringslidechart.com/
The couple of things it doesn’t have, I added myself. There’s probably an iPhone app with all this info,
but there’s something about having a sliding chart in your hand that really
makes you feel like you’re doing some real engineering.
What’s your workspace setup like? (Work/Robotics/Home)
Nothing too special
about my workspace. Generally a mess of papers, parts, random nuts, bolts and
tools, all of which prevent me from finding my trusty TI-89 calculator and
Mitutoyo calipers when I need them.
What do you listen to while you work?
Spotify. I have a fairly
eclectic musical taste. I’m a big fan of music festivals, such as Sasquatch or Austin
City Limits. Look at the lineup for any of those from the last 10 years and
there’ll be a lot of stuff I enjoy. I also listen to NPR a lot, and sometimes
I’ll bring up something like The Jimmy Fallon Show on Hulu and listen to it in
the background… what can I say, I enjoy distractions.
What’s your schedule like during build season?
Officially our schedule is MWF from
5-9 and 12-9 on Saturday. Unofficially… well let me just say that after 16
years I have not yet figured out an appropriate robot/life balance during build
season. I think because building these robots just demands so much. One thing I
love about 118 is that we’ve got incredibly dedicated people involved. That
dedication is contagious and there’s usually people working on some part of the
robot 5-7 days a week, many times very late into the night.
What everyday thing are you better at than anyone else?
I wouldn’t say I’m the best at anything. The other 118 mentors
would tell you I’m really good at a week 3 panic attack about the direction of
our robot and if we’re going down the right path.
What’s the best advice you’ve ever received?
Nothing specific comes to mind, so
I’ll share some advice I wish I would have received. If you’re a high school
student about to start college, take a break from FIRST. It’s too hard to be a
mentor, keep your studies up, and enjoy life the way you should be in college.
In addition, don’t stress about graduating as early as you can. Go out and get
internships and co-ops, study abroad, take extra classes. In my opinion, all of
these things are way more important (especially the co-ops) than getting into
the real world a year or so earlier.
What is your favorite guilty pleasure?
In the off season I see
quite a few movies and watch a lot of TV. I’m sure there’s something better I
could be doing with my time than catching up on Breaking Bad or binge watching
The Wire.
Fill in the blank. I’d love to see ________ answer these same
questions.
Dennis Hughes of Team
27. He taught me a lot back in the day and has plenty of good stories about robots.
Anything else you want people to know about you?
In 2005 I made a short
video just for our team of our robot at the 3 week mark in order to get
everyone excited about our progress. I continued this the following years and
this evolved into the Robonauts release videos. Almost more than building the
robot, I enjoy making the robot videos. Our team has put a priority on trying
to make our robots look good, and showing them off in our videos. In the last
days/hours of build season when we should be fine tuning mechanisms and getting
some drive practice, we instead spend that time shooting down helicopters,
launching prototypes through driver stations, and making sure the robot lights
are working just right so we can get the perfect shots of it driving around. In
other words, our priorities are a little out of whack, but we wouldn’t have it
any other way.
“Success is going from failure to failure without loss of enthusiasm.”
– Winston Churchill
Tags: How I Work