Jenny Beatty has been working in public service for a very long time. She started directing her efforts to FIRST over 14 years ago. She is the co-founder of NEMO (Non-Engineering Mentor Organization) and a critical volunteer in the Baltimore area. Let’s hear more about how she works and how she got involved in FIRST. 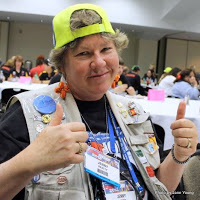 Current Gig/Job: Volunteer Maryland Coordinator
Alma Mater/Degree: BSN – BS in Nursing from Syracuse University; MPH-Masters
in Public Health from The Johns Hopkins University
Current Team(s): They are all my teams
Former Team(s): Team 007
Location: Baltimore, Maryland
Hobbies: Hiking, Cooking, Yoga, Reading – a lot!
What inspired you to do what you do? Tell us a story.
I have been committed to
public service and giving back since I was a teen. I was in the National Health Service Corps  – sort
of a Peace Corps for health workers in the US. I am a big fan of AmeriCorps.  I think this country
would be well served by having mandatory national service.  I’ve been a life-long volunteer.
I know there are some
people who know from an early age what they want to do, but I think most evolve
in the journey. I believe figuring out what you don’t want to do is just as
important.  I’ve learned to trust my gut
and be willing to take a chance.
I actually dropped out
of college with only a few credits to go to take a less than minimum wage job
washing dishes in a place I
fell in love with. This ended up being a very smart decision, but no one
thought so at the time. Because I was in the mountains and working with
different agencies, I got trained as an EMT for search and rescue.
This training led me to thinking about other careers. I did end up going back to
college, but into a different major (nursing) because I wanted the flexibility to
be able to travel, to work and live different places and with different types
of people. I then discovered I really didn’t like the hospital environment, but
I did like public health and research. One experience usually opened doors to
another.
I’ve been fortunate to
have a life filled with interesting work experiences and have experienced
different cultures. I have been a commissioned officer in the USPHS and an RN in various settings –  tiny/remote and huge/urban. I’ve worked as a forest ranger, as a park ranger, at a weather observatory, as an official taste tester for a large corporation, with medical students, and as a program coordinator for many research projects at large
universities and  agencies. I have also spent a bit of time on evaluating
various organizations and services.
The road map is a little
winding, but sometimes that’s the way life is. It’s a big world out there.
When I was introduced to
FIRST in 2001, I thought, “Wow – look at the opportunities here for lots of kids.”
What I was not expecting was to get sucked in from the mentoring and
volunteering perspective. The robotics competition world has introduced me to
hundreds of fascinating and passionate people.
In robotics as in life, I
am usually rooting for the quiet teams and the little guys. I am fascinated by the different types of people who are drawn to this program. I get
the attraction for the engineering types, but I have also seen the lives changed of students who have gone on to other fields like psychology, special ed
teachers, graphic designers, communications, and even lawyers. The teamwork and
problem solving skills introduced in FIRST were the hook for me.
Robotics should be hard
work, but it also should be fun, especially for the mentors. As soon as the
hard work really outweighs the fun, it is time to step back.  Let’s just say I’ve met my fair share of burned out mentors!
What is your day job, and how’d you get there?
I was just hired by Volunteer
Maryland as a Volunteer Maryland
Coordinator. Volunteer Maryland is an AmeriCorps program through the Governor’s
Office. I have been placed in a new nonprofit –STEMaction -where I will be helping develop infrastructure and recruit, coordinate, and train event volunteers and mentors across all four
FIRST programs.
How I got here is a story
involving more than a decade of volunteering for FIRST and VEX Robotics.
The robotics timeline:
2001: Discovered FRC as
a team parent when oldest son joined a team.
2003: Team 007, out of
pure desperation, asked me to “help” as a key mentor. I was clueless as to what I was
getting into.
2004:  Invited to join the original
class of FIRST Senior Mentors I retired my Senior Mentor business card in 2009, but still stayed
involved. Started NEMO with Kathie Kentfield and joined the Chesapeake
Regional Planning Committee.
2005: Joined the FLL
Planning Committee and continued to serve as a judge advisor and event advisor
in Maryland.
2006: Helped create the Baltimore Area Alliance. I am a co-facilitator for the BAA this year.
I continue to be involved
with all the committees listed above after all these years. Event roles over
the years for FRC include Volunteer Coordinator, Inspection Manager, Judge,
Ambassador, and mostly “Other” and behind the scenes. I will be adding FTC to
the menu this year.
Since 2009 I have also
been involved with VEX. I have been an Event Partner and advisor locally for event
planning for the past 5 years. I have been the Robotics Events Director for
Baltimore City Summer Schools using the VEX platform. I spent 3 fun years as a
National Judge Advisor for the VEX World Championship and somehow found my way
into the STEM Hall of Fame.

What is your favorite story to tell about robotics?
There are so many! Swapping stories, especially
over adult beverages after a long day of volunteering, has got to be one of my
favorite parts of being involved with FIRST and robotics programs. So many student,
mentor, and event stories! Some of them are inspiring and many are stories of lessons
learned. Many of these stories are very, very funny. I am a fortunate girl to
have so many belly laughs.
But here is one of the
important stories for me.
Back in 2003-2004 there
really was no such word as non-engineering. I was searching the CD forums and
the FIRST website and trying to figure out where the advice was to help with
the stuff I was doing with teams. I
started communicating with a mentor in California and another one in Connecticut who seemed to
be asking the same kinds of questions I was on the forums. During a discussion
on the phone one day with Kathie (we had never met) we decided what was needed was
a support group for outsiders like us and jokingly named it with a made-up word
– the “non-engineering” mentor organization. NEMO.  We had no idea where this would go.
NEMO now has hundreds of
registered members, and thousands of downloads of mentor
written papers
off the website. It is grassroots at
its finest. But I believe many NEMs don’t get the recognition and respect they
deserve for the contributions they make in the FIRST community.
Another favorite story
which is much shorter:
Having Woodie’s wife
Margaret say to me, “Of course I remember you. You are the only person who has
ever asked me for my autograph. “
What’s your favorite robot that you didn’t help build?
I know this is shocking!, but I have never really helped build a robot. I have
driven one a couple of times. But I can still answer this.
The wood robot Team 007
built in 2003. The team had a really really tough year with lots of cards
stacked against them. This robot kept falling over on the ramp at the grueling
off season at the Maryland State Fair  (2 days of competition,
but with corn dogs, funnel cake, floods in the NASA tent, and hundreds of
people wandering in trying to figure out what the heck was going on next to the
Tilt-A-Whirl and Exhibition Hall.)  Next
thing I know there is the sound of sawing wood in the pits, the students chop
the robot in half and the team goes on to be on the winning alliance. Problem solved.
What apps/software/tools can’t you live without?
(Work/Robotics/Home)
Gmail, dropbox, Iphone, sharpies
on a lanyard.
What’s your workspace setup like? (Work/Robotics/Home)
I have a lovely office – it feels like a tree house. 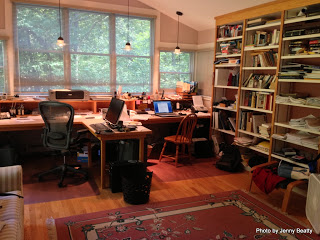 I
also have a work bench in a basement with the tools of my trade. 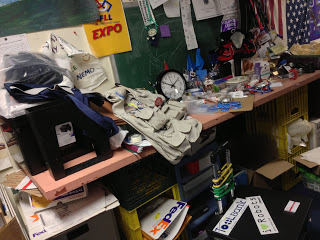 In this photo I spy – my fishing vest with 13
pockets, event crate with all sorts of supplies, my O’s and Raven’s silly hats,
NEMO buttons, and all my old business cards from when I was a Senior Mentor.
And lots of hand sanitizer.
What do you listen to while you work?
I am usually listening to WTMD an independent
radio station in Towson MD. http://wtmd.org/radio/ or http://www.mvyradio.com/
on Martha’s Vineyard.
What’s your schedule like during build season?
Mostly the same as the rest of the FIRST season
– which is pretty much 11 months/year. This year with my new job I will likely
have some involvement with 30+ events for FIRST programs in Maryland and more
than 700 volunteers. Lots of emails, outreach events, recruiting and networking
events. And driving. I have a Prius, with the tags “ROBOMOM.”  I often have people waving and honking at me
when I am driving. Do they know me or do my tags just crack them up?
What everyday thing are you better at than anyone else?
Don’t tell anyone but getting people to agree to do stuff before they realize what they
actually committed to. I also have a reputation for asking the really hard
questions which often make people uncomfortable.
What’s the best advice you’ve ever received?
Pick your battles
carefully.
Don’t do anything when
the babies are asleep that you can do when they are awake.
What is your favorite guilty pleasure?
Spending a couple of
days by myself. If there is a casino nearby – even better.
Fill in the blank. I’d love to see ________answer these
same questions.
Mark McLeod, head mentor for 358

Things I seem to say a lot:
You can’t make this
stuff up.
How did I get here?
My life is a Venn diagram.
Getting stuff done.
Really???
Anything else you want people to know about you?
I have two terrific sons
who are a lot of fun to be around, and a patient amazing husband who puts up
with me as long as I don’t talk robotics at the dinner table.
During competition
season I don’t do high fives or shake hands. It’s not that I don’t like you. It’s
just I learned by eliminating these friendly gestures at events I caught a lot
less infectious diseases. Remember I have a graduate degree that included a lot
of epidemiology!
“Life is what happens to you while you’re busy making other plans.”
– John Lennon
Tags: How I Work

Build Day 20: Collector/elevator is coming together

Adrienne Emerson – This Is How I Work