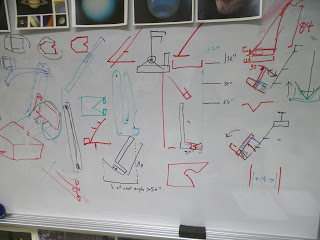 Our design was going along a little too well. We knew something wasn’t right and we finally figured it out.

Using this mess on the white board and a very detailed CAD sketch, we finally realized that our current design crashes into the 54 inch cylinder very quickly once we start climbing. We spent several hours at the drawing board trying to solve this dilemma but we’re just not sure how we can climb and still function as the robot we want.
In better news, our collector system had its first fully functional prototype test and it worked like a charm. It’s amazing what the addition of two well placed pool noodles can do for a system.
We tested several more wheels for our shooter. These BaneBots wheels worked very well. We’re going to try the other colors as well and see if we can get an even better CoF (coefficient of friction). The 1/2″ hex shaft mounts directly to the new VEXpro Versaplanetary gearboxes. Since these wheels are so small we are spinning them really fast, like 19000RPM fast. We found that the 10:1 Versaplanetary can easily be modified into a 1:1 gearbox, with the removal of the planets, sun, and ring gear stage. These gearboxes have been great, we can very quickly swap out motors and wheel mounts to test different configurations.
During prototyping one of our discs (“Tiger Lily”) had to be sacrificed for a prototype indexer mechanism. We needed the rim of a disc to act as the pusher, so she had to be destroyed. (Yes, all 19 of our discs have names).

Hopefully tomorrow we can get back on a common path. Right now we think we have a shooter and collector that will do what we want but the climbing mechanism is very much up in the air again. We’re reevaluating our entire game strategy.
– Spectrum

“The only real mistake is the one from which we learn nothing.” – Henry Ford