If you followed along during the build season, you saw nearly all of our collector prototyping. We spent many hours getting to the final version of our collector. This is truly iteration at it’s best.
We initially took our cues from the 72 hour builds that mostly used over the top rollers.
After that we looked into a version of team Boom Done’s El Toro style collector. We modified the axis of rotation to allow for smoother contact with the ball. This system worked alright but it still wasn’t fast enough for our needs. The prototype also had the collector motors out past the bumpers which was the opposite of our design goals. Overall we were happy with the speed of collection and we thought this would give us a wide angle to collect from. We also tried several other failed attempts during the phase including spinning a polycarbonate stick and other solid shaft collectors like Boom Done’s original design, we didn’t like that they had to expand so far around the ball and thought the wheels would be better.
In the next video you will see the first sheet metal version of the collector. It has 3 degrees of freedom being able to move up and down, left and right and spin each collector stick. Again the system worked but we know improving it would be necessary.
During this process we had found that we kept needing to tighten the surgical tubing that we used to all our collector sticks to pivot in and out. Eventually we realized we could hard mount them and just use the ball compression to allow us to collect them. At the same time we tested the collector wheels (formally known as mecanum wheels) on our collector. They worked very well. They allowed us to center the ball and collect from a very wide area in front of the robot. At this point we were still using prototypes and bolting things down to pieces that weren’t designed for it.

The final version is actually pretty simple. It uses 2 pneumatic cylinders (1 1/16″ bore, 1.5″ stroke, double acting), 2 BB775 motors in 10:1 VersaPlanetary Gearboxes with 1/2″ hex output shafts and simple sheet metal plates. To extend the hex shafts we used colson live hubs from 221systems. We did have to cut down the hex output shafts from the VPs this allows the coupler to fit right up against the gearbox. Just on the other side of the coupler we mount a hex bearing in a small sheet metal c channel. The bottom wheel is a 3.25″ VexPRO versawheel and the shaft is an uncut 18″ long VEXpro 1/2″ hex shaft.

We put together a quick gif showing all parts that go in to the collector mechanism. It really is rather simple. 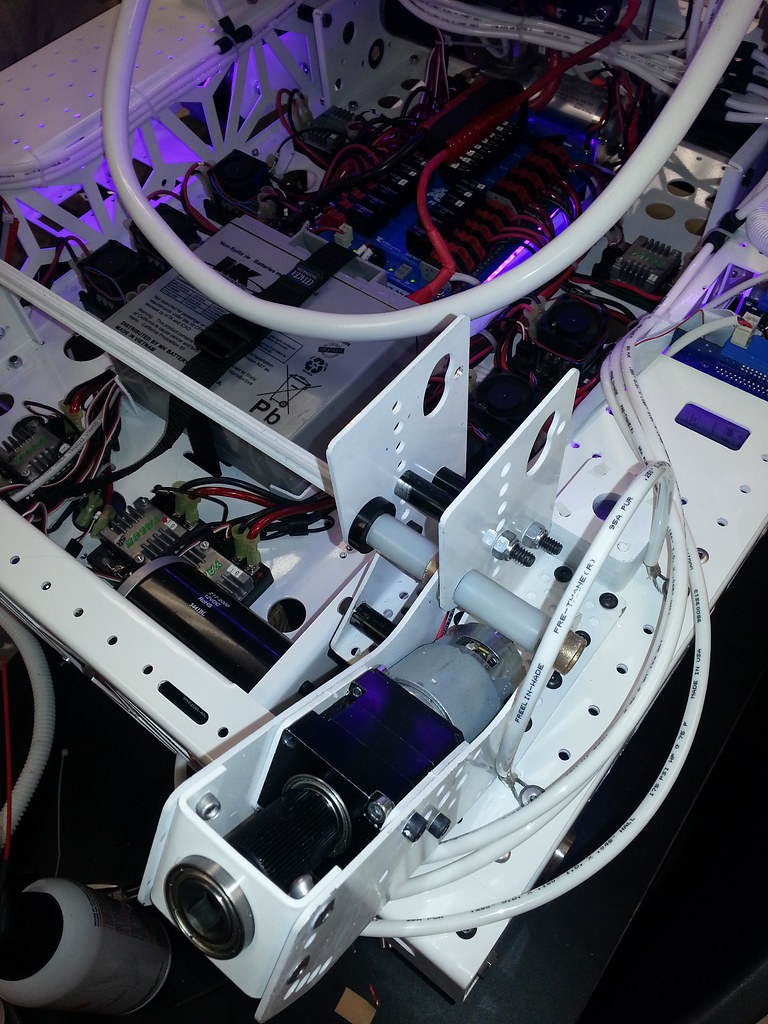 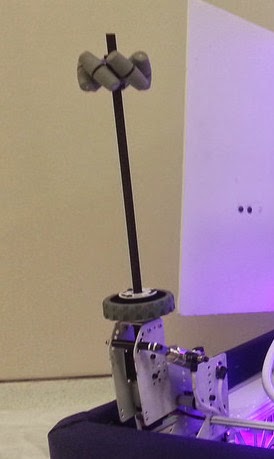 The spacers in this setup are all VEXpro tube axle with 1/4-20 bolts going through them.
To stabilize the two structures we have a piece of AndyMark churro tube that is tapped on both ends with a 1/4-20 bolt screwed into it. We actually use this bar as a hard stop for our launcher bar as well. 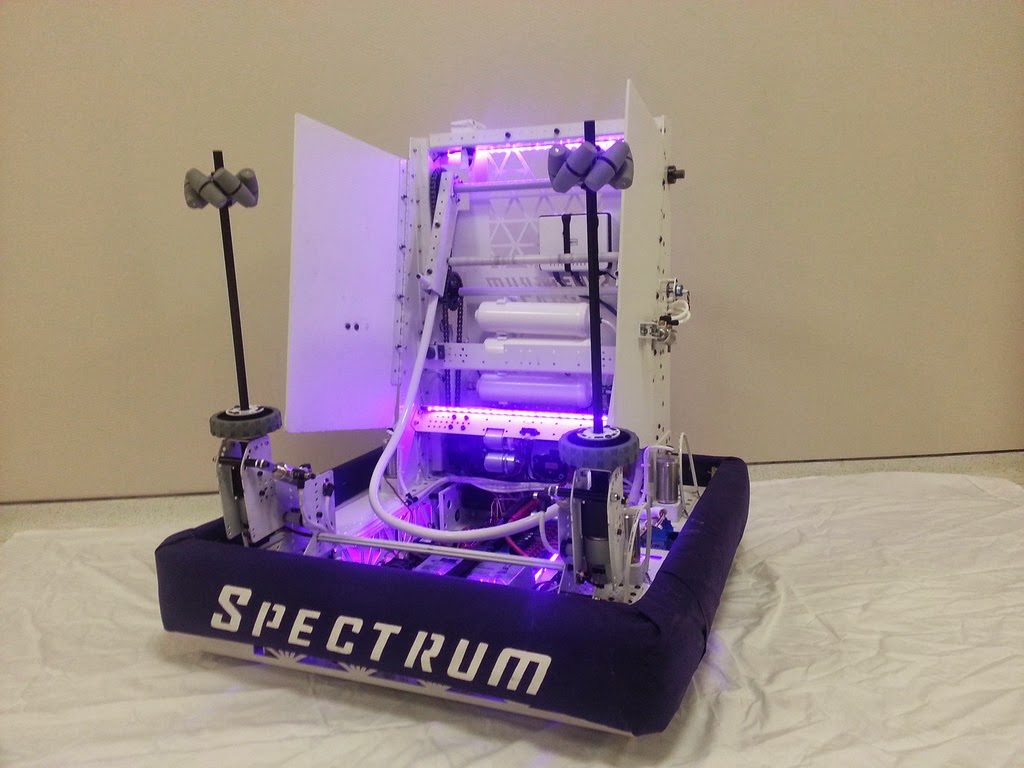 You may have seen in our reveal video that we had purple hubs on the collector wheels. Those were 3D printed parts but when we practiced with them we were able to break them when they got caught on the side of the field. They worked fine in compression but once they were in tension the plastic could not take the stress. We moved back to the real VEXpro hubs and had no problems at the Dallas Regional. We did have a small issue when we got entangled with a  robot that had a net but that was it. We also had 4″ Versawheels in the video and in the reveal but we found the smaller wheels worked much better so we moved to the 3.25″ wheels with the hex bore already in them.
The distance between the two hex shafts on the collector is about 23″. We compress the ball to have it go through the collector.
Solidworks CAD files of Sipping Bird
– Spectrum

“Anyone who says failure is not an option has also ruled out innovation.” – Seth Godin