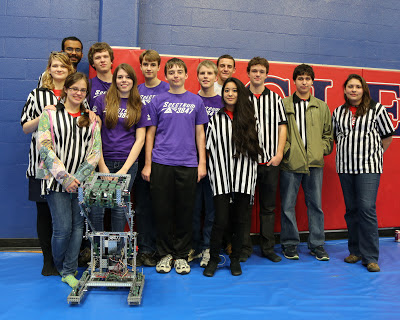 Spectrum was at the Houston VEX Regional this past Saturday (Dec 1st). We had both 3847A and 3847J on hand to compete for the regional title. We also had an entirely Spectrum referee crew for the event (7 volunteers).

The robots had a few nice improvements since we finished up the Houston League three weeks ago. Most notably, polycarbonate plates were added under the drive train to reduce the chance of getting stuck on stacks. 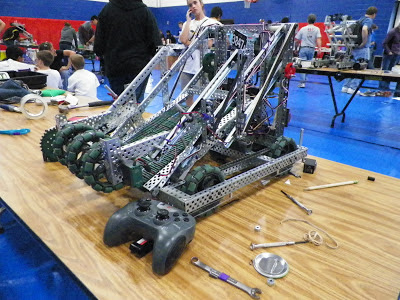 The robots both performed very well. We ended up ranked 18th and 24th because of a few technical issues in matches, but we both robots were picked to go into the elimination matches. Thank you for
Clear Falls 2335 and KAOS 1429 for picking 3847J, we had a great time on your alliance. 3847A was picked by 2587 Discobots and 1412C Road Hazards and went on to beat the 2335, 1429, and 3847J alliance for a spot in the finals. Thank you both 2587 and 1412C it was great working with you and were so proud to bring home some hardware from the event as Regional Finalists. Also congratulations to the Discobots for winning the Excellence Award. 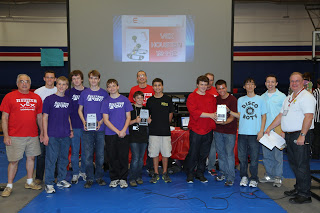 Congratulations to McCallum Robotics 8756A, GONBOTZ – B 6966B (from Mexico), and Cypress Ranch Robotics Team 3335A on your regional victory it was well deserved.

Our VEX season is over for the fall, we may have one more tournament in the spring we’ll see how that goes.

Now it’s time to gear up for FRC, kickoff is only 32 days away. We have our Mock Kickoff this Saturday. For more information visit: www.spectrum3847.org/mockkickoff

“Life is pretty simple: You do some stuff. Most fails. Some works. You do more of what works. If it works big, others quickly copy it. Then you do something else. The trick is in the doing something else.” – Tom Peters, Chicago Tribune, July 11, 1994.

Build Day 20: Collector/elevator is coming together