We’re now 4 days through the season. This is when teams are finalizing their initial designs and beginning to build more high quality prototypes.

One of the main goals for the first few days of the season is to make sure everyone on the team has a very firm grasp on the important aspects of the game strategy.

Points in FRC STEAMworks
We worked out a points analysis for the game. This led to several conclusions. The GEARS have a diminishing return, the first 2 GEARS you score (not counting the reserve) are worth a combined 40 points. Then the next 4 are combined to be worth 40 points, then the next 6 combined are worth 40 points. This means your robot has to do the same amount of work for fewer and fewer points. They are scored in groups so if you score GEARS 7-11 but not the 12th all that work won’t be represented in the final score.
The FUEL points are interesting since it takes a certain amount of scored goals (3 for high, 9 for low in Telop) to actually score a point. This should be far less time consuming then an unscored gear. FUEL (balls) are always worth the same amount of points and there are a ton of them in this game, 600 possible balls on the field.
What does this mean for STEAMworks matches? Most likely teams will focus on getting GEARS first since they are worth the most points for the least work for the first few GEARS. After each Rotor starts spinning the alliance should consider if they are going to be able to reach the next threshold to earn points. An alliance with 3 rotors spinning (6 GEARS scored) and only 45 seconds left in the match probably shouldn’t continue giving GEARS to the airship since they have little chance of scoring 12 GEARS for the next Rotor.
FUEL is always valuable unless you overload the BOILER or score too many FUEL too close to the end of the match.
ROPE CLIMB is the highest valued single item and probably the best points/sec in the game.
Our Keys to STEAMworks
Time Analysis
How long does each of our cycles actually take? 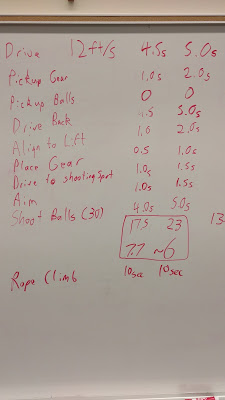 Our quick estimate says that we should be able to get 6-7 cycles of 1 gear and 30+ balls in the telop period of the match. These are optimistic, defense, driver mistakes, waiting for alliances to clear needed space, etc will slow these times down. This assumes we are using a floor loading GEAR pickup so we don’t have to align to the loading station.
Initial Robot Plan
After strategy comes robot design. What robot do we build that can accomplish our strategy.
Robot Requirements
Current Design
Most of our current design is laid out in various ever changing and often confusing Solidworks sketches. 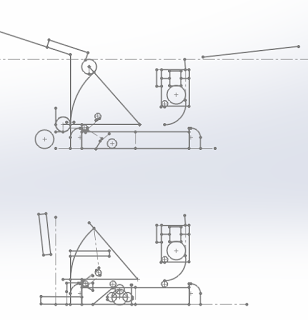 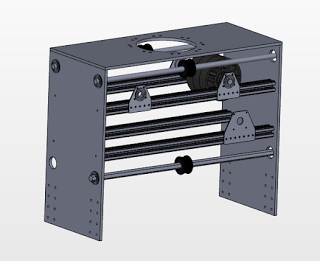 Open CAD Models
This year we are making all of our CAD completely available every Tuesday night (probably Wednesday morning). We will be updating our Grabcad Public Partner Spaces with the previous weeks CAD files. Feel free to use them however you wish. We make no guarantees about completeness or how much help they may be but we think it may interest some teams. If you don’t see any updates contact us and we will update, we may have just forgot to push to the partner space.
You can find links of the 2017 Gamma Ray page of our website.
https://spectrum3847.org/robots/2017-gamma/
Check out check_in
We are part of a brand new program from the RoboSportsNetwork called check_in. Along with 5 other teams from around the country we will be sharing our build progress from the week and showing off our designs. Tune in every Tuesday at 7 ET (6 CT) for check_in. The first episode aired last night can be seen on the RoboSportsNetwork Youtube Page.
Twitch: https://www.twitch.tv/frcgamesense
Youtube: https://www.youtube.com/user/FRCGameSense
– Spectrum

“What lies before us and what lies behind us are small matters compared to what lies within us. And when we bring what is within out into the world, miracles happen” — R.W. Emerson

Katie Widen – This Is How I Work