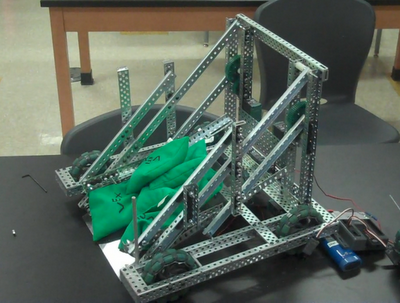 We’ll have over 25+ teams from across the Houston area competing in qualifying matches. These teams will than head down to Galveston on the 20th and finally to Clear Creek ISD on November 9th and 10th to crown Houston VEX League Champions.

Here is a photo of one of our robots. It’s still missing its collector and it needs to be wired up before we can do full tests. The second robot is a bit further behind but should be ready for the competition as well.

We still need to add a few sensors and get the programming together as well but the main goal of the first event is to make sure the robots work than we will have three months to improve everything before the regional on December 1st.

Last Friday we continued our Mentor for a Day program by having Jose Lopez, Senior Design Engineer from Mitsubishi Caterpillar and representative from the American Society of Mechanical Engineers, here to speak with us about his engineering projects and why he enjoys engineering.