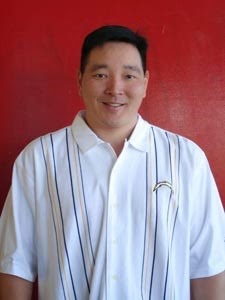 This week we are featuring a revered
mentor who’s been with his team since their inception, Glenn Lee. He’s led his
team to become a Hall of Fame team, IRI champions, and winners of many regional competitions. There isn’t an FRC team
out there who doesn’t recognize the Hawaiian Kids in their signature flower
patterned shirts. He helps the robotics community, by holding grant writing
workshops to help teams fund their programs. He also raises thousands of
dollars for his team every year, so that his team can travel to regionals.
Recently, he had an appearance on Behind the Lines,
which is a new show from the makers of GameSense and FIRST.
[Responses from Aug 13, 2014]

CD
Username: waialua359 (formerly a student’s account which I took over during
the 2005 season).
Current
Gig/Job: Waialua High & Intermediate School STEM Learning Center
Coordinator, Career-Technical Education (CTE) Coordinator, Robotics and Design
Technology Instructor.
Alma
Mater/Degree: Leilehua High School, University of Hawaii @ Manoa B.S. in
Electrical Engineering, Minor in Math, Master’s in Business Administration.
Current
Team(s): Team 359-The Hawaiian Kids since inception in 1999.
Former
Team(s): N/A
Location:
Waialua, HI
Hobbies:
Hiking, Bike Riding, Golf, Collecting Memorabilia, Traveling, Fantasy Sports,
Old School Toyota Cruises and Family Time.
What
inspired you to do what you do? Tell us a story.
Team 254 just finished their rookie
season in 1999. Mark Leon, a member of the Cheesy Poofs with NASA Ames, had
ties with Art Kimura, a STEM leader in Hawaii. Mark and Art arranged for
members of the Poofs from Broadway HS to come and showcase their robot and
explain what FIRST was all about. Jason Morella of the REC Foundation, was the
lead teacher of the Poofs at the time. From my understanding, they approached
both us and Team 368 because of our involvement and successes with racing
Electric Vehicles since 1996. I can still recollect my first impression of what
I saw when I stepped into the library where the demo took place. I was totally
amazed, excited, and reluctant all at the same time. I never could have
imagined that over 15+ years later, I am still heavily involved.
What
is your day job, and how’d you get there?
I worked briefly as an intern
Electrical Engineer at Hawaiian Electric Company and the State of Hawaii as a
Quality Control Engineer. I quit both jobs to pursue a career in Education as a
Science/Math teacher at Waialua High & Intermediate School in 1994.
What
is your favorite story to tell about robotics?
2010 was one of the worst build
seasons our team ever had. Our robot didn’t work very well when it was time to pack
and ship our robot to our Week 1 Event. After shipping our robot, it gave us
very little time to prepare for both a Week 1: San Diego and Week 2: Arizona
events in the Mainland. When we arrived in San Diego, one of our students realized
he forgot the driver station laptop at home in Hawaii! Luckily we were able to
get it as a check in luggage the next day because we knew someone from Hawaiian
Airlines. Of all the FRC events we ever attended, this was the only event where
we didn’t get inspected on the practice day because our robot had too many
issues and because we had to pick up our driver station at the airport that
day.
Ironically, we went on to have the
best season ever winning 3 FRC regional events and IRI that year. Our robot
during the entire season still could not kick a soccer ball nor could it climb
a pole for the end game points consistently. Better to be lucky sometimes than
good!
What’s
your favorite robot that you didn’t help build?
Definitely Poi Pounder XV this 2014
Season. Our new equipment, a Flow Waterjet, did most of the work. J It
was easily the least amount of construction our team had to ever do during
build season.
What apps/software/tools can’t you
live without? (Work/Robotics/Home) IPhone and IPad.
What’s your workspace setup like?
(Work/Robotics/Home) *see pics. 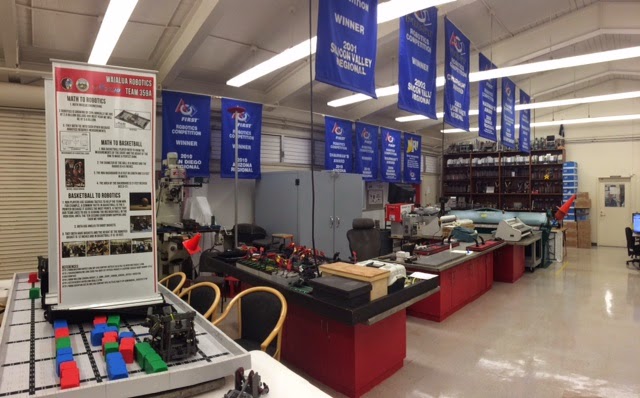 What
do you listen to while you work?
I’m a total 80’s music fan listening
to both Soft Pop and Hard Rock during that era.
What’s your schedule like during
build season? I used to spend the most hours at school during build season 7
days a week, till almost midnight. With a family now and our program with much
better facilities, equipment and mentor support, we normally work no later than
8-9pm on most days with a few Sundays off.
What
everyday thing are you better at than anyone else?
I enjoy Grant Writing and raising
money for our Robotics Program. Over the years, I’ve spent countless hours
learning how to best utilize our limited resources in acquiring more of it, so
that our students have ample opportunities to experience STEM via Robotics
Competitions.
What’s
the best advice you’ve ever received?
Life is short. Live each day like
it’s your last. **Words I’ve lived by for
sure.**
What
is your favorite guilty pleasure?
Spending money on useless things. I’m
a sucker for items on Craigslist, Ebay and Amazon.
Fill
in the blank. I’d love to see    Paul Copioli     answer these same
questions.
Anything
else you want people to know about you?
I’ve worked part-time at the
Honolulu Country Club as a Banquet Waiter the past 25 years.
“Everything in life should be
parallel and perpendicular” –Unknown
Tags: How I Work

Awesome Performance at IRI, TRR is coming up