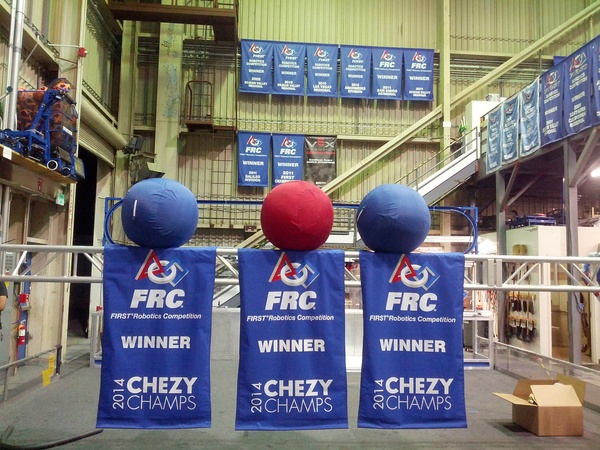 We’re starting a new series today — “This Week in FRC” —  which will feature the recent happenings inside the FRC community. We’ll include new information when it’s released from FIRST headquarters and the FRC Blog, we’ll highlight the interested threads/photos/whitepapers on Chiefdelphi (CD from here on out), FRC twitter memes and happening, new YouTube videos, and perhaps even a /r/FRC post or two.

Many of the 2015 Regionals have confirmed their dates and venues. The updated list of venues is on the FIRST website is here. Sometimes, the community knows about an event date before it’s official, so this year people will be posting such news in this CD thread. Also, to those who don’t know, Easter weekend coincides with Week 6 this year; this may play a part in some teams’ regional decisions.
For those of us in the Texas area, we know that Dallas is Week 1 & Alamo is Week 3. For the out of state but still close to us events, we know that Bayou is Week 4 and Oklahoma is Week 5. Official announcements for Lone Star, Hub City (Lubbock) and Arkansas should happen in the next few weeks.

A lot of the hype around the FRC community lately is dealing with the build up to Chezy Champs. The reigning World Champions, FRC#254 The Cheesy Poofs, are hosting their first Off-Season, and its poised to be one of the best events in FRC history. They recently posted the blue banners they will be awarding to the winning alliance. Here’s the original thread with all the details about the event. It’s going to be August 30th and 31st (Saturday and Sunday of Labor Day Weekend) at Bellarmine College Prep, the home of the Cheezy Poofs. The crew from GameSense will be on site to do live commentary of the entire event. They are completely overhauling all of their technology to make Chezy Champs on heck of an event. They will have new overlays with stats, photos, and more to make this a professional production. We highly recommend you tune at least to catch the elimination rounds on Sunday afternoon. Here is the link to the live stream location on their Twitch Channel

FRC Beta Test Hardware is Out

The Beta teams have started receiving their hardware and photos and discussion has started on this thread. Many of the Beta teams have agreed to post their results on this Facebook page, so be sure to check it out and learn more about the future control system of FRC.

Here is a great speech from a Little League coach. There will be much better videos of this speech soon but this is the best we have right now. This is a great example of gracious professionalism in use outside of the world of FIRST.

Updated: Here is the official video

“The road to success is dotted with many tempting parking spaces.”
– Will Rogers

Tags: This Week in FRC