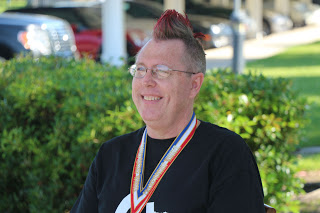 We’re kicking off our new blog series “How I work” with the head mentor for the 2013 FRC Champions, FRC#1477 Texas Torque. Scott Rippetoe has been involved in FRC for a long time and has been working to build a strong FRC program in Conroe ISD since 2004. He will be celebrating his thirtieth wedding anniversary with his wife, Suzanne, in December. His son, Michael, and daughter Marta, are both currently in college and both alumni of FRC#1477. He is retiring from Conroe ISD, but will continue working with Texas Torque and in the school district coordinating robotics education at all grade levels.

What inspired you to do what you do? Tell us a story.
Maybe I should tell you why I am not an aerospace engineer. I did not like to work. That is what it felt like when I was a cooperative education student working at LTV Aerospace. I woke up, made a one hour commute to work, returned home exhausted, and fell asleep on the couch. While I spent time on many interesting projects, such as the updating drawings for the S-3A Viking and Multiple Launch Rocket System, coatings for space shuttle tiles, A-7K eject seat testing, and engineering liaison for the B-1 bomber, I did not enjoy what I was doing. It is a little ironic that I am using many of those skills as a mentor for a FIRST Robotics team.


What is your day job, and how’d you get there?
I teach at the Academy of Science and Technology in Conroe ISD, at least for another two weeks. I am retiring after thirty years in the classroom. My career “crisis” happened during my junior year of college. I met with Robert Chilton, my advisor in the Department of Aerospace Engineering, to see what other options were open to me besides continuing in engineering. Because I enjoyed tutoring other students, he suggested I look into teaching. I had enjoyed physics in high school and after meeting with Dr. Robert Beck Clark in the Department of Physics, I decided to become physics and math teacher. He and I would stayed in contact for nearly twenty years. He was always incredibly supportive, not only of my career but of those of many physics teachers in Texas. I spent three years at Taft High School near Corpus Christi, a year in Bryan ISD, four years at Brenham High School, and the last twenty-two at the Academy. Except for the first graduating class, I have taught nearly every student that has gone through the Academy of Science and Technology. I love the program and leaving it is one of the most difficult decisions I have ever made. It did not come without shedding more than a few tears.


What is your favorite story to tell about robotics?
Probably the one I tell the most. One year, my students and I brought our fire-fighting robots and course to Sci:Tech, our local science fair and exposition. I had modified one of the robots so it was radio control and had a camera mounted to give the driver a robot’s eye view. A young kid, maybe eleven or twelve years old, spent the day hanging around our booth, asking questions and driving the robot. It was at that demonstration that he decided to apply to the Academy so he could do something cool like robotics. As an Academy junior, he joins Team 1477 and helps us to our first ever win, at the Lone Star Regional. He still works with the team, though now as the programming and media mentor. Rayne was in St. Louis this past April when we won the FRC World Championship along with Team 1241 and Team 610. The best part of all this is that he and I have become good friends. His brother will be a senior next year and co-captain of the team. His mother and father are two of our biggest supporters, helping as mentors, chaperones, and cooks, even loaning a lake house for our end-of-season party. Now everyone should take a moment to wipe that tear from your eye.


What’s your favorite robot that you didn’t help build?
Every robot built by FRC Team 118, The Robonauts, since I joined Texas Torque in 2007. Back then, we were known as the Northside Roboteers. It is pretty obvious they all share in the amazing tradition that is NASA. My favorite of all time is Ballacuda from 2008. We were putting the finishing touches on our robot, Chewbotta, when 118 released their six-week build video. It was both terrifying and inspiring at the same time. I am glad I get to see Ballacuda whenever we drive down to practice with 118 at their facility.


What apps/software/tools can’t you live without? (Work/Robotics/Home)
SolidWorks, MeshCam, Modela Player, DropBox, Goggle Mail, Google Drive, Google Calendar, Google Documents, Google, Microsoft Word and Excel. I am not sure if this is what you mean, but I also find a hot soldering iron and multi-meter useful.

We build in what we call Texas Torque World Headquarters, a small room that was converted into a research lab for the Academy of Science and Technology. It has a small machine shop and storage room attached, each about the size of a walk-in closet. There are four lab tables along the walls, one for electronics and programming, another for media and CAD, and a third for building on. There is a Roland CNC table mill on the fourth lab table. We keep our practice field elements in the lab and pull them into the hall when we are working. There isn’t enough space for me to list all the other junk we have in the lab.

What do you listen to while you work?
I like to broaden the musical experience of the team. If I get to the computer first, and I usually do, we listen to The Clash, Talking Heads, The Beatles, Cake, Beck, Big Audio Dynamite, Neil Young, George Harrison, Franz Ferdinand, The Psychedelic Furs, They Might Be Giants, and Johnny Cash. If I need the students to leave the lab, the list expands to include much more.

What’s your schedule like during build season?
From Kickoff to Champs, we meet about thirty hours per week as a team. The meetings start at 3:00 PM and usually go to 8:00 PM. Our parents bring us dinner on the nights we stay late, usually Tuesday, Thursday, and Friday. We go from 9:00 AM to at least 4:00 PM on Saturdays. Again, the parents make sure we have lunch so we do not have to waste time going somewhere to eat. We try to take off Sundays and/or Mondays.

What everyday thing are you better at than anyone else?
I will put my dry rubbed, mesquite smoked, baby back ribs up against any in Texas. Yes, that is a challenge.

What’s the best advice you’ve ever received?
Actually, it is the advice my students have benefited from for the past thirty years. I doubt Robert Chilton had any idea that his recommendation to consider a career in teaching would impact so many students.

What is your favorite guilty pleasure?
Ice cream, almost any flavor that involves chocolate, coffee, or peanut butter.

Anything else you want people to know about you?
I hold the Guinness Record for building the World’s Largest Playable Electric Guitar. It is now in the collection of the National Guitar Museum. 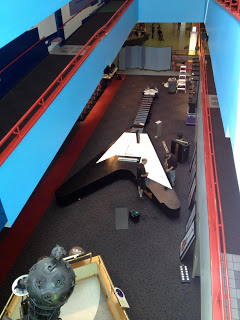 Carnegie Science Center in Pittsburgh
Tags: How I Work