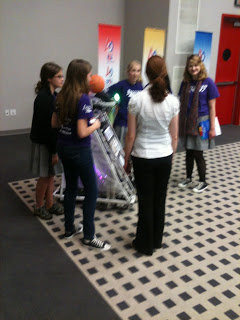 The Houston VEX League Finale was this past weekend, November 9-10th, 2012. Spectrum’s two robots 3847A and 3847J both competed very well. They ended up seeded 9th and 14th respectively. 3847A was an alliance captain of the 7th seeded alliance and 3847J was the first pick of the 6th seeded alliance captain.
3847J made it to the semifinals and lost to two teams from Pasadena.
Congratulations to Pasadena ISD (231C) for being ranked #1 and qualifying for World Championships and Austin Middle School (1412C) and Awty International School (4128A) for winning the tournament and qualifying for World Championships.
3847J Match 10
3847A Match 23
In the skills challenges 3847A is ranked 16th in the world in programming skills with 45 points and 38th in the world in driver skills with 105 points. The top 30 teams on March 3rd, 2013 in each challenge category qualify for the World Championships.
Spectrum members volunteered as referees and score keepers for this event.
Allen Gregory, our Coach and Head Referee for Houston VEX, was awarded the Volunteer of the Year award for the Houston League.
On a different note we also had a demonstration at the National Society of Women Engineers Conference on Friday (11/9/12). We talked about FRC and the benefits of mentors to educational programs.

“Act as if what you do makes a difference. It does.” – William James

Dialing Back the Server Turbine