We recently outfitted room 3103C (our side room/kitchen/overflow) with the rolling A/V rack we use for events, and a 2U dual-Xeon server for storage and possibly for rendering some new content for the season. To supplement this computer setup we added a shelf to the room that doubles as a desk and storage for assorted A/V supplies (projector screens, tripods, speakers, etc.). 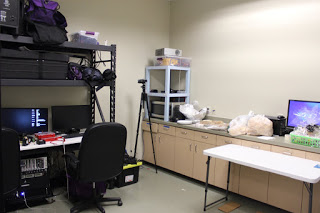 While both computers were running without a hitch and the shelves had decidedly not fallen while in use, there was one small problem: the sheer size and quality (not PWM or static pressure optimized) of fans used to cool the components produced a sound comparable to a small turbine, making any communication with persons outside of the room near impossible and generally being a nuisance. 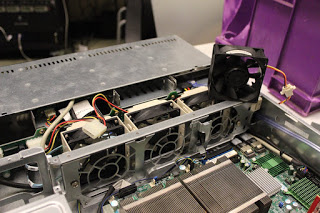 Of the five total fans present in the case: three were an easy solution. The two 80x38mm fans used to cool the CPUs and the one directed over the RAM and PCIe slots were replaced with specimens of approximately one-half the thickness. This, however, turned out to be only part of the problem, as the 40mm fan in the PSU, which turned out to be two fans back-to-back, continued to produce a significant roar.

Some initial investigation revealed a few important details about these fans:

These made it impossible to simply remove or unplug one fan. So a slightly more roundabout solution was conceived. Amidst much debate over whether or not the PSU’s controller was also smart enough to kill power if it sensed the fan spinning but not being powered, we opted to test this fact, arriving at the conclusion that no, the controller did not care if there was power to the fan header or not so long as the signal pin told it the fan was moving.

With this newfound insight into the inner machinations of our PSU’s controller, we stripped off a length of insulation from one fan header’s wire and spliced on a jumper cable from a hobby electronics kit. The female head on the cable had to be taken down to size a little bit, but it managed to hold itself together with a little help from some electrician’s tape and didn’t short anything out when we turned it on. The PSU, having been tricked into thinking both fans were running, turned on and functioned properly, and with a significantly less tumultuous sound to boot. 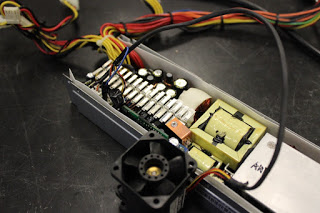 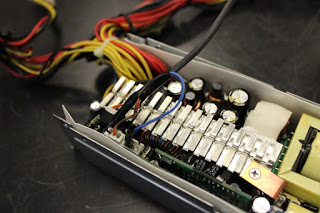