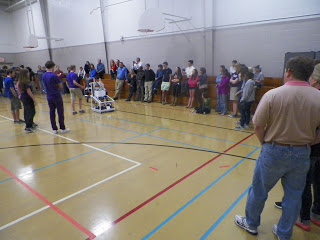 Today was our open house, Spectrum Showcase, for parents and friends to come see the robot that we spent six weeks building. It was fantastic event.

We were building/troubleshooting at show time so some of the parents had the chance to see the team work together to do some problem solving and building on the fly. The first ever power up was at 6:10 for an event that was supposed to start at 6pm. We found a bad PWM cable and a new problem with the Victor 888s that we had to solve. We also had to do a very fast Jaguar swap. All that was happening while The Box was being mounted on the lift. We still have some problems to work, but for a first test Gamma Ray performed well. The drive train is solid and the lift is working well. Collection is still our best system, any disc we drive into gets sucked up into The Box. The lift is working far better now after all the tweaks. We have to move on to small changes on the shooter to make firing faster and more reliable. 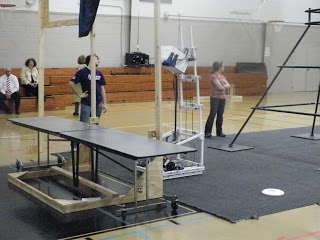 Day 6: Prototypes are getting closer

Adam Freeman – This Is How I Work