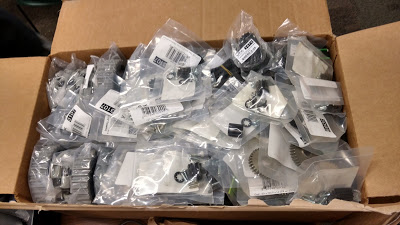 Sam Skoglund from FRC#2232 posted about his robot design spreadsheet before the season in this Chiefdelphi Thread. We started with his Master Spreadsheet as a base and over the past few weeks expanded on it to include a ton of useful information for our team for this year’s robot. Here is our version of the master sheet, much of the information is taken from Sam’s, plus many of the COTS suppliers such as VEX, AndyMark, REV, and McMaster.com. This has been an invaluable resource for us this season we use the belt calculator and pneumatics cylinder table almost daily when working through are designs. We can’t verify everything in this spreadsheet is accurate or functional but we figured if we find it so amazingly helpful maybe other teams would as well.

View it Online or Make A Copy

View our entire CAD for the season right here.

Today was one of our first VEXpro Present Days. Our large order with a lot of our drive train and intake parts arrived including a large number of MiniCIMs that we plan to put on our drive train.

Also included were W-tread and Diamond Tread versa wheels and omni wheels for our drive trains. A large number of pinion gears were also in this order.

Our first sheet metal run of the season came in on Friday so we were able to quickly assemble the drive train and get it wired up over the weekend. We also mount a sheet metal version of the intake. One of the biggest things we learned from this run is where we can improve the maintenance of the robot and places where we can become more efficient.

We realize after building this one that we don’t need our drive rails as small as they are so we are adding in the top and bottom flanges that we took out at the beginning of the season to give more room to the intake. That will make the drive rail design more similar to last year’s except without the 8″ pneumatic tires. We have CAD in place that allows us to push down 2 1-1/16″ pneumatic cylinder just in front of our rear omni wheels to take traction off of them and transfer it on to stationary traction pads. This should make us much harder to move when we want to stay in place while shooting.

Our shooter is still under development. We should have more pictures and videos coming up this week. Our plans haven’t changed from last week we are just working through details such as compression and the belt lengths to try and optimize balls feeding into our shooter.

Our friends Apex Robotics have started calling their robot hopper their Fuel Tank. We think that’s pretty clever and makes it easier to differentiate between the field hoppers and the robot fuel tanks.
The intake and elevator will be changing from using hex shafts spinning in bearings to using hex shaft that is drilled and tapped to 5/16″-18 and bolted to 3/8″ bearings using shoulder bolts. This is the same way that Cheesy Poofs build their rollers and how the new WCProducts roller system works. We were able to buy the shoulder bolts and bearings in bulk for pretty good prices. The process does require a bit more machining since each shaft needs to be turned to length, drilled, tapped, and counter-bored but it will make for a much easier robot to work on once complete.

The prototype gear subsystem is using WCProducts complaint rollers and a sheet of carbon fiber to pickup the gears. The carbon fiber was tested after we tried several different plastics and composite materials. We are also looking at adding a rear kickup roller but it’s difficult to package in our current geometry. The surgical tubing in this prototype is to allow for the gear intake to be compliant as we are scoring the gear similar to some of the release mechanisms used in the 2011 FRC Game Logomotion.
Being able to quickly place a gear at the rear of the lift and depart will help make cycle times that much faster.

This subsystem is also progressing slowly. We have a good idea of what it will need to work but we haven’t been working on it as much as we should. We are waiting for a shipment of roller tube to come in from WCProducts before we can build the full scale prototype of the climber. 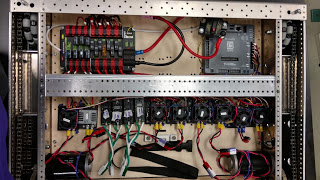 We are getting a lot of practice in nicely running wires. This is just our prototype robot and it looks fantastic.
Hopefully the real robot will look this nice.

We are starting to look into hooking up RGB LEDs for this year’s robot to provide feedback to our driver we will also use rumble feedback in the joysticks for times when the driver may not be able to see the robot.
– Spectrum

“That is what learning is. You suddenly understand something you’ve understood all your life, but in a new way.” – Doris Lessing

P.J. Lewalski – This is How I Work