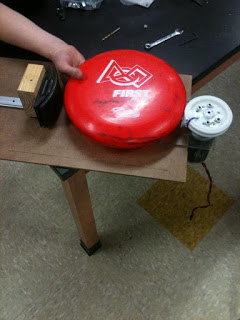 We were back at it this morning. Several of us spent well over 24 hours in the lab this weekend. We have done more prototyping in 2 days than we did all of last build season. School starts back up for St. Agnes tomorrow so we are going to have to back down our meeting times at least a bit.

We had an extremely productive day. After lunch we went down to our gym and played a game of Human Ultimate Ascent. We cut out a few mock goals and hung them up and had our team members act like robots. This gave us a bit of a feel for the game even though it’s just an exercise.

Shooter
We know that shooting discs is hard. Getting them accurate is even harder. We are currently looking at way to reduce how accurate our shooter has to be and how much time it takes us to aim the shooter. Below is one of the shooter prototypes from today. One of the things we learned is that traction on the disc is probably the most important factor when shooting.

Collector
We had several variations of a collector prototype; floor collection seems extremely useful in this game, since we think a lot of people are going to miss a lot of shots. Why go back and pick up discs if we can just get them from the floor? Our leading idea is that our shooter and collector will be one and the same.
End Game

To help us solve this incredibly hard challenge we built a 1/2.5 scale model of the pyramid. The idea is that we will have VEX robots climb the pyramid until we have a solution from our FRC robot. We have a few plans in the works that are looking promising. Hopefully we will have working prototypes by the end of the week.

Drive Train
After discussing drive train ideas it seems like we will go with the new Kit Bot that VEXpro is producing.

It has every feature we could have asked for in a drive train. It even uses our standard fastening system 3/16″ rivets and #10 bolts. We know they didn’t design it special for our team, but they could have fooled us. We still aren’t sure of our chassis dimensions but the last discussion of the night is leading us to something around 28″ x 28″. We’re planning to do a 6 motor single speed drive. We’re planning to do some stuff to the drive to give us some more room in the middle of the robot. The new size requirements are making this year’s design phase more like a jig saw puzzle. You know what you want to include you just don’t really know how to make everything fit together.
Up next
We need to figure out our disc storage system.
Robot Geometry – How do we fit everything in a clean and elegant package?
Parts ordering – We need to get parts ordered so they start shipping. Waiting on parts is the worst part of build season.
– Spectrum

“Take calculated risks. That is quite different from being rash.” – George Patton

Justin Montois – This Is How I Work