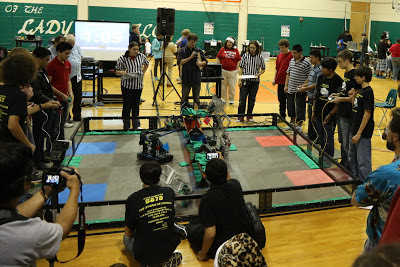 Spectrum is helping organize the Houston ISD VEX Robotics League as part of their UIL Academic tournaments. So far we have helped start VEX Robotics teams at 7 HISD High Schools and we should have two more new schools join for the rest of the league.

The first league event was this Saturday (12/15/2012). It was held at Sharpstown High School. Spectrum organized the event by handling the logistics of getting the fields and the teams to the site. We also provided the majority of the volunteers, along with help from Judy and Josh Bryant, and students from Young Women’s College Preparatory and Carnegie Vanguard. Spectrum students handled the reffing, score keeping, and queuing for the event and helped with setup and take down.

The event was a huge success with 11 rookie robots and 7 veterans we did not expect the event to run as smoothly as it did. After only a few matches it was hard to tell the rookie teams from the veterans because they were all very professional and competing well. The matches progressed very quickly with each team getting 7 matches before 3:00 pm. We’re very excited to see how these young teams improve throughout the duration of the league.

The results from the first day can be found on the event webpage.

Spectrum is very proud to be supporting the growth of engineering programs at high schools in our area.

“Success has nothing to do with what you gain in life or accomplish for yourself. It’s what you do for others.” – Danny Thomas

After Action Meeting (Where we go from here)