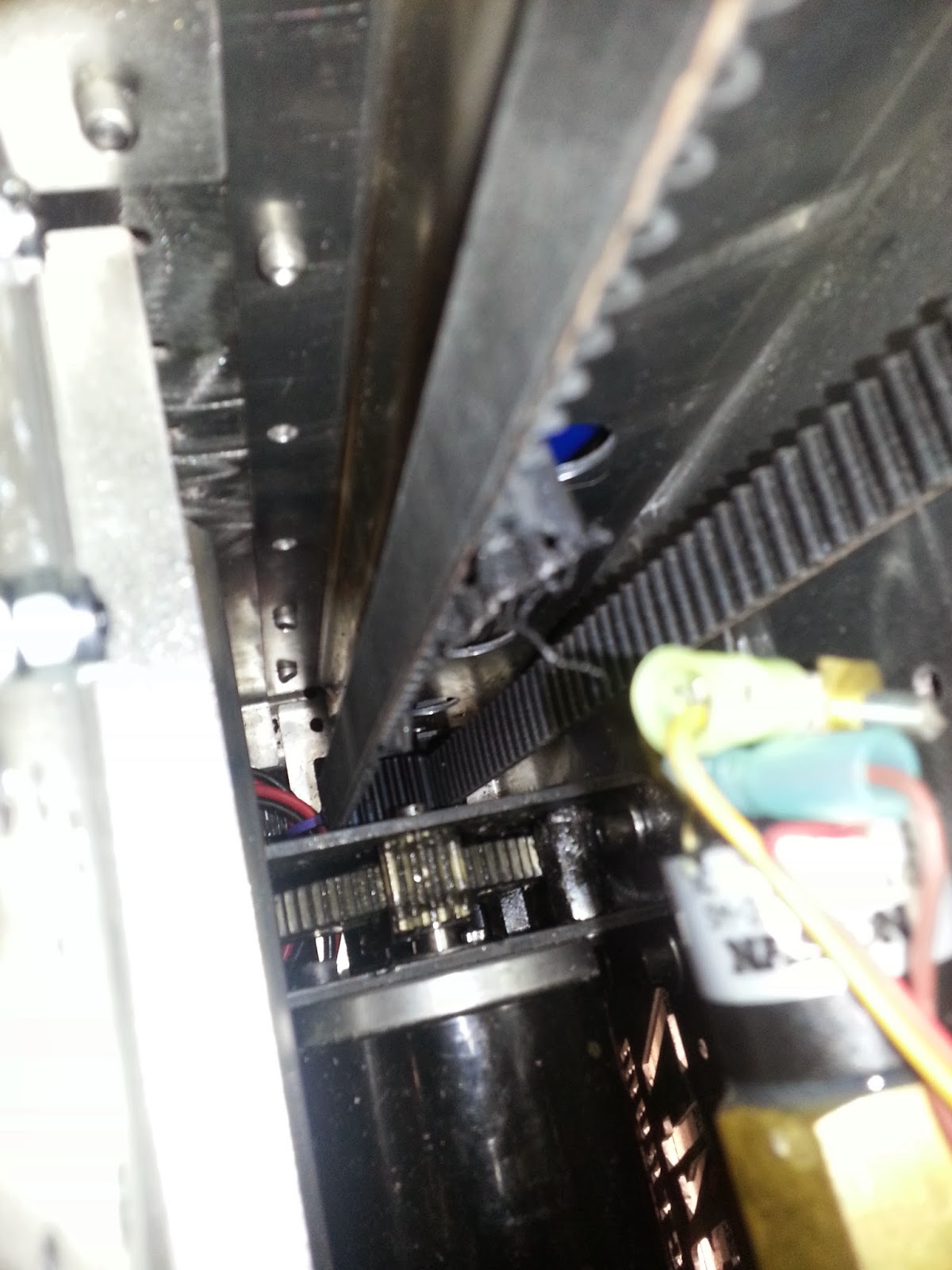 Sorry for no post yesterday, we had a really short meeting since there were parent-teacher conferences. Mostly worked on chairman’s award stuff.
We’ll start with a video today of us doing some catch testing. We’re not really planning to catch that often but we think we’re pretty decent at it. If there is defense it might be a different story, which is why we might not be catching very often.

We also received our new proper 4″ mecanum rollers today. We’re still not sure if we will be switching back to octocanum or not but the new rollers look a lot nicer than the ones for 6″ wheels. We’ll probably do some side by side tests once we have the competition robot up and driving.

Our shooter has been slowly getting worse since late last week and we weren’t really sure why. We had been making some changes on the upper assembly, but no one really looked down at the first couple stages because we figured well, how could those be breaking? We were very wrong. 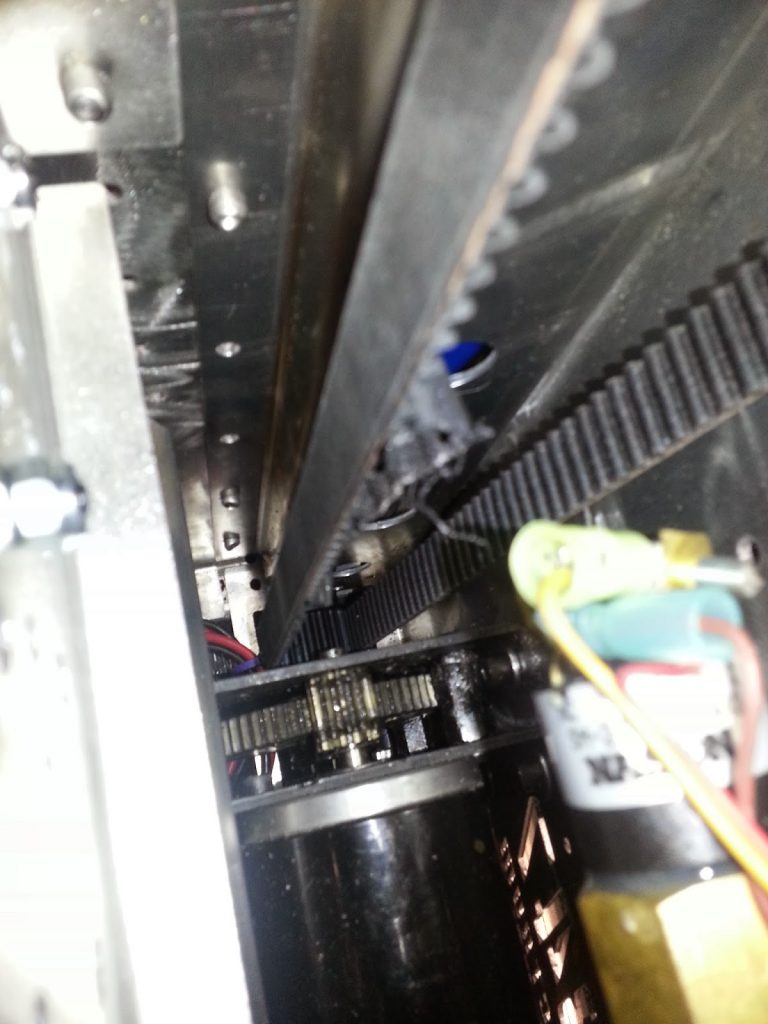 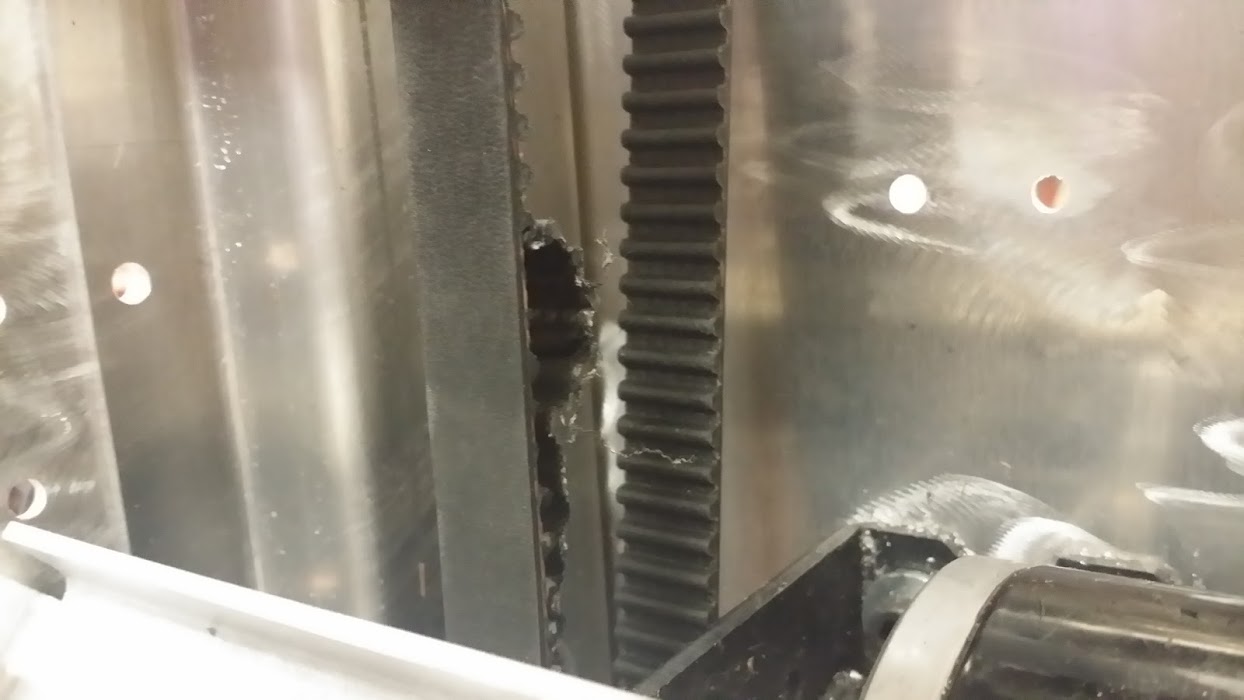 That is a picture of the belt that drives the first stage of the launcher. Apparently you really shouldn’t ever allow your belt to ratchet since you can just rip the teeth clean off the belt backing, we now know that from experience. We moved the belt around to where the bad section wasn’t engaged during launch and we got all our distance back. The ratcheting was happening when we didn’t have limit switches or other sensors installed on the launcher and we were running it into a hard stop. Now that we have more sensor feedback we shouldn’t have this issue anymore. We still might move to chain just to be safe.
We received our bigger bore cylinders,1.5″ bore x 1″ stroke,  today for our drive train. Somewhere in the design of our drive train we forgot to do some basic math on the leverage needed to lift our robot and now were paying the price by having to redesign to fit the larger cylinders. Had we just moved the point on the modules that the cylinders push down, we wouldn’t be in this mess. We made a pretty poor system today which will get us through some testing, but we’ll have a more complete fix ready for the competition robot.
We spoke with our powder coat sponsor and they say it will be done by Friday or Monday. We’re hoping for Friday but we know we can assemble the robot in the last week if we have to.
We’ve fixed most of the problems that cropped up over the weekend and we’re happy with where the competition robot should be once we get her built.
– Spectrum

“The willingness to share does not make one charitable; it makes one free.” ~Robert Brault

Paul Johnson – This Is How I Work

Day 30: When life gives you mecanums