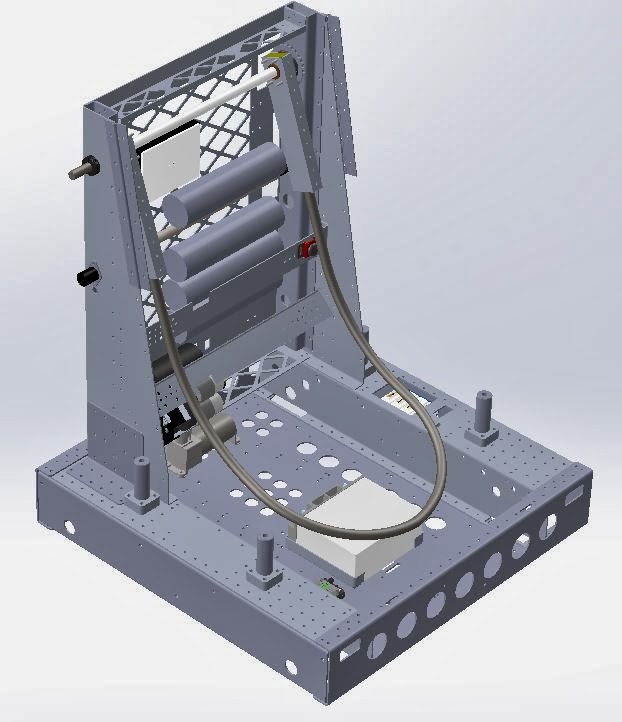 After the long weekend we got many of our orders from week two. We had a large amounts of screws, bolts, and nuts from McMaster-Carr and Bolt Depot. We received our encoders and IMU from Sparkfun, and we also got an AndyMark order which contained part of our PDV–it consisted of Talons and stealth wheels.

We also received several VEXpro packages. We finally received our hex bearings that we have been waiting on, and we also received our VEXpro PDV items along with two 2×1 VersaFrame rails. The biggest surprise was the VEXpro order that we placed late Sunday night arrived today; we ordered parts for the real robot already since we expected a week or long lead time, but they got them to us in well under 48 hours. VEX is really stepping up to make everything right with their customers. We’re still waiting on 4″ Mecanum wheels, but that’s our last back ordered item.

This might look like the same picture from yesterday but several hours have gone into improving it since then. Many of the items are very subtle but will make a huge difference when we actually start assembling it. We started the process of changing our CAD model for the drive train from .125 to .09, it takes some time to make sure all the spacing stays the same. We also worked on the second revision of our collector, which hasn’t been produced yet, but we are already finding ways to improve it.

The launcher had a very successful test and we should have more to post after we get some video during tomorrow’s meeting. (Hint: 2 CIMs and 2 BB775s is 1200W)

“We are all salesmen every day of our lives. We are selling our ideas, our plans, our enthusiasms to those with whom we come in contact.” – Charles Schwab