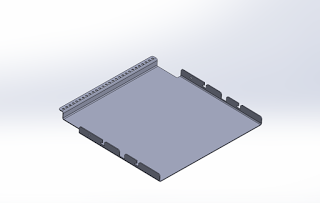 Nothing spectacular to show yet. We still have some things we haven’t published on the blog that are integral to our strategy this year. Hopefully, in the next few weeks we will know for sure that they all work and we can publish them.

We’ve started the CADing process. Here is the start of a simple belly pan for the robot. It’s going to get lots of holes for wires and electronics mounting.

We’re working on the CAD for our shooter, collector, and other systems as well.

One of the items we prototyped today were wings that fold out from the side of the robot under the bumpers to push frisbees towards our collector. That way if we hit a disc with any part of the front of our robot, it will hopefully be collected by our intake. The goal right now is for these to be spring actuated and deploy as soon as we move during autonomous mode.

We’re also working on a pop up version of the “Can Opener” Hanging device. That way we can still drive under the pyramid during most of the match and then pop it up right before the end and hang quickly for 10 points.

“Great discoveries and improvements invariably involve the cooperation of many minds. I may be given credit for having blazed the trail, but when I look at the subsequent developments I feel the credit is due to others rather than to myself.” – Alexander Graham Bell