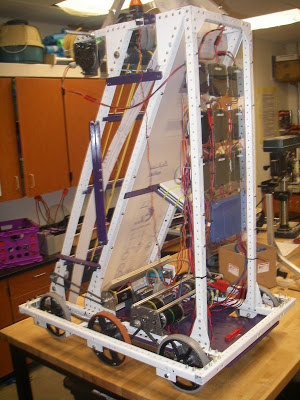 We mounted the electrical panels and wired up the robot today. It still needs some wire care to make sure all the wires are tucked away nicely and won’t cause us problem later. But for now we got it working, the collector feeds the balls up to the shooter and it’s able to fire them. We aren’t able to do real distance shoots until the weekend because we don’t have a tall enough ceiling in the classroom. All the current system on the robot check out under manual control. We have a lot of automation to put on this thing before it will work perfectly.

We also continued work on our bridge device that will be mounted to the back of the robot. Hopefully we will have it on tomorrow.

We still are working on the bumpers they always seem to take longer than they should. Does anyone have a good source for 1000 Denier Cordura in the Houston area? 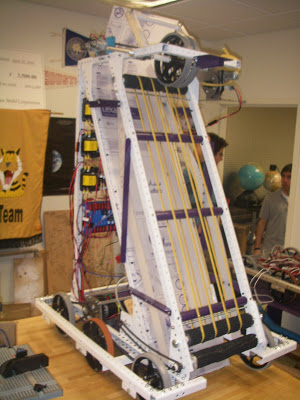 We’ve also began the duplication process for this robot. Most of the parts we have CADed so it’s easy to make our replicas. They are going very quickly because we aren’t really worried about them looking nice just as long as they function.

Programming has decided that the use of an off board processor will make our vision system much more reliable. The current plan is to use a Beaglebone running openCV to process the images from the camera and then send back the aiming information to cRIO.

Day 12: Drive train is on the ground