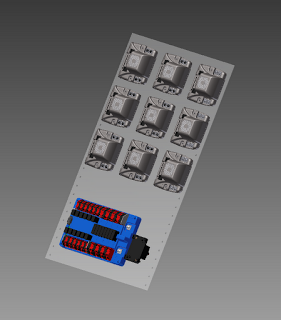 Electrical is now the main priority for the robot. We have most of the mechanical systems mounted but we need to get the electrical on so see we can begin testing. The Jaguar board is coming together but we need the Jaguars themselves to finish it off. The main base plate will hold the cRIO, side cars, and the battery.

Here are the CAD renderings of the plates 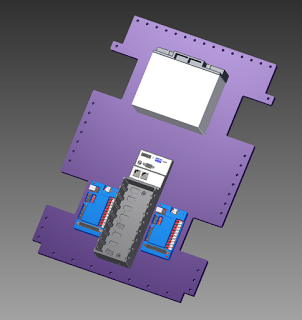 We are going to mount most of the electrical components on neoprene to absorb some of the vibrations. Just spinning up the shooter causes most of the robot to vibrate.
It’s coming down to the finishing touches for the building phase, we still have a few more things to mount such as the camera and the signal light. Oh yeah and a bridge device.
The bumpers are slowly progressing we will have the fabric this week to finish the first set. We want to make sure the fabric is strong this year because the balls are going to be running into and under the bumpers regularly.
We did a lot of work on the website today. It’s not finished yet but it’s getting a lot closer. Let us know what you think.
I was looking through a few other teams past build logs (Killer Bees 2011 and Robowranglers 2010) and I think we are about on track with were we should be.
We need to get a move on if we want to build a practice bot, it shouldn’t take that much time and will greatly benefit us when it come to competition. We already have a nearly identical chassis, we just need to build the collector and shooter mechanisms to have a functional practice machine for after we ship. It won’t be an exact duplicate but it should be close to functionally equivalent.
– Allen Gregory

“To give yourself the best possible chance of playing to your potential, you must prepare for every eventuality. That means practice.” – Seve Ballesteros