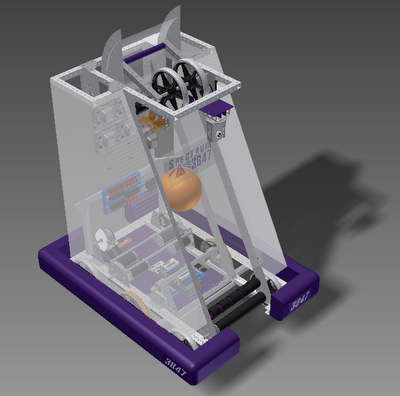 We did a lot to the robot today. We made new polycord belts to replace the yellow ones that we previously had. The new ones are clear. We mounted the new collector and elevator motors and they are working perfectly. The new mount is much more stable and we were even able to briefly tested the sensor feedback on the collection system and it’s looking good.

We are continuing to make spare parts for the practice robot and we should be able to start assembly this weekend.
We also worked out some issues with the shooter velocity control. We are now getting a much more consistent velocity from the shooter motor which should make testing far better. In case anyone is interested we did this by implementing a moving mean function that removes some of the erroneous values we were getting back from the sensor.
We haven’t posted a CAD picture in a while because we have not been updating it much, but we did more this week.

Now you can see the side panels that will be incorporated into the robot to prevent the balls from entering certain areas. The final product will look similar to this.
– Allen Gregory

“What happens is not as important as how you react to what happens.” – Ellen Glasgow