Andrew Lynch is the lead mentor of team 2587 the Discobots and a close friend of Spectrum. Andrew is a true journeyman of Texas robotics teams. He has been on four different teams in his time in FRC, helping to start two of them. He also is one of the key players in the Texas VEX Robotics community from it’s inception in 2008. Just this past weekend he was the MC at Texas Robot Roundup. We asked him about his favorite team memory, his robotics experience, his education, and much more.

Former Team(s): 624, 118, 2158
Location: Houston, Texas
Hobbies: Playing Music, Flying Airplanes
What inspired you to do what you do? Tell us a story.
I started my FIRST career in high school in 2001 for Team 624 CRyptonite in Katy, Texas. I was more interested in playing music and working on cars more than robots through most of high school. My senior year,  the 2003 Stack Attack season ignited my passion for robotics and ultimately to study electrical engineering.
What is your day job, and how’d you get there?
Before I started Electrical Engineering at UT-Austin in 2003, I started working on robotics projects with the Robotics club at UT-Austin. I was enamored with the idea of designing PCB boards and 3D parts. By my sophomore year, I assumed a leadership role of the robotics club at UT. I started the original club paperwork and re-branded into its current form, RAS. I was also fortunate to be accepted into the NASA-JSC Co-op program.  Through this experience I was able to mentor with the Robonauts in 2005, Chainzilla.
After getting another dose of FRC, I was ready to start a FIRST team in Austin. I decided to channel the power of college mentors from the UT-Austin RAS club. I randomly met a Chemistry teacher named John Sperry and we decided to form a FIRST team called the AusTin Cans 2158. Fortunately, RAS had a few great young college mentors Richard McClellan and David Yanoshak to help start the team.
I went straight into graduate school at Rice University to do research on pipe inspection robots. I founded the Rice Robotics Club (RRC) and then received an interesting phone call from Lucia Sevcik about starting up a new FRC team at Lamar High School.  After two quick meetings at the school, the DiscoBots, Team 2587 began their rookie year in 2008. After that, I got another phone call from Jason Morrella (I should probably stop answering my phone), and then the DiscoBots established the 1st VEX event in Texas called Houston VEX.
Around 2011, I finished graduate school at Rice with two masters, one in computer science on swarm robots and another in mechanical engineering on pipe inspection robots. I now have joined a startup company called Sparx Engineering doing rapid prototyping for the petroleum & medical industries. Its been more than 10 years of FIRST and I’m still having fun.
What is your favorite story to tell about robotics?
I would have to say the story I tell my kids over and over again is the DiscoBots 2009 Lone Star Regional. This was our 2nd year and we had a solid robot.  The robot didn’t look elegant but it worked well and the kids really understood the Lunacy strategy.  Our student coach, Lalo Torres posted up a 20 page strategy guide to Lunacy on Chief Delphi.  We seeded 5th in the rankings and urged the 4th ranked Robonauts to pick our team.  Team 118 ended up picking 1801 and the DiscoBots picked 1421 and 704.  The quarter-final match between the Robonauts and DiscoBots was fierce and ultimately that was our biggest hurdle to winning the event.  From the quarter-finals, we went on to win the regional and performed well at championship.
I tell this story to remind the kids every year when the Robonauts release an awesome video, that robustness & strategy can sometimes defeat elegance & beauty!
What’s your favorite robot that you didn’t help build?
Encore – Wildstang 2004, that robot really inspired me and it has a great video!
What apps/software/tools can’t you live without? (Work/Robotics/Home)
Desktop Apps: Eclipse, Solidworks, Altium, Python, Matlab, Inkscape, MikTex
Web Apps: Trello, Harvest, Google Apps
Web Tools: Drupal, WordPress, AWS,
Physical Tools: Calipers, Multimeters, Breadboards, Diag. cutters
What’s your workspace setup like? (Work/Robotics/Home)
I work out of the Southfork House from the TV Show Dallas. It was built as a large model home for the Southfork community in Houston… quite odd…  However, it came on the market and Sparx Engineering now operates out of the Southfork ranch. We have a powder printer, machine shop, & circuit board build-up tools.

As a graduate student I worked in Ryon Lab at Rice University. The DiscoBots were fortunate to obtain a section of the floorspace for FRC activities.  Ryon Lab is a 5 story building with a 20 ton crane and a huge opening in the middle of the building for all sorts of experiments. I’ve seen people fly aerial vehicles, launch mini-bots, and do interesting drop tests from 3-stories.

What do you listen to while you work?
Grooveshark: Usually making a playlist for every music show or festival I’ve attended.

What’s your schedule like during build season?
We shifted to doing Tuesday, Thursday, and Saturday as a full team schedule in 2013.  That schedule worked well for the majority of the team.  We still had a sub-team of CAD & designers that would be discussing online everyday throughout build season.

What everyday thing are you better at than anyone else?
Filtering and consuming timely information!  My multiple RSS readers, email filters, alert messages, and web productivity apps.  Allen Gregory is probably the only person who can information challenge me!
What’s the best advice you’ve ever received?
I think the most misunderstood and best advice is about failure
NASA mission controller Gene Kranz’s “Failure is not an option”  which I think of often in a six-week build season and projects with tight schedules.  However, in some cases, failure is definitely an option and it will be a learning experience.

What is your favorite guilty pleasure?
Playing racing games on a tablet.  I don’t really play any other types of games, but if I do, I’m racing!

Fill in the blank. I’d love to see ________ answer these same questions.
Dr. Rob Ambrose from the Robonauts and the original creator of the Robonaut!

Anything else you want people to know about you?
I re-built an engine/interior/panels for 1984 camaro in high school. I bought the car for $500 at a junkyard!  Sold it for $2500 when I graduated high school. 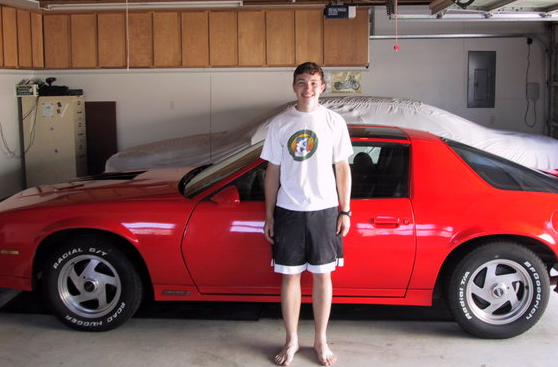 “Failures are finger posts on the road to achievement.” – C.S. Lewis
Tags: How I Work